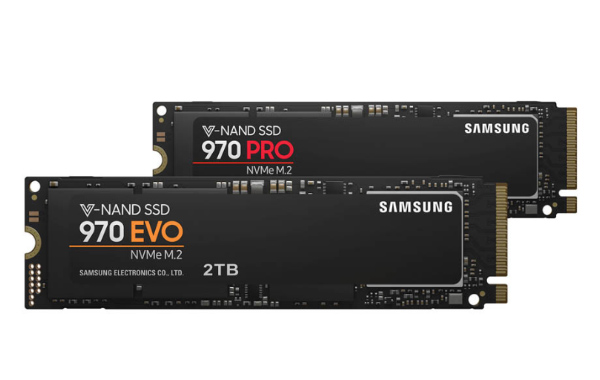 It is fitted with Samsung's 64-layer 3D MLC V-NAND and offers sequential read and write performance of up to 3.5GB/s and 2.7GB/s respectively.

The SSD 970 Pro will only be available in 512GB and 1TB capacities.

The 970 Evo also supports the PCIe 3.0 x4 interface and NVMe 1.3. However, it is fitted with higher density 3D TLC NAND.

Performance remains impressive, with sequential read and write speeds of up to 3.5GB/s and 2.5GB/s respectively. This is achieved using Samsung's SLC cache technology.

As is the case for all TLC NAND-based drives, the performance of the 970 Evo drive will vary quite greatly depending on capacity.

Both drives will come with 5-year long warranties and will be available from April 26 onwards.

Here is a table summarizing their specifications:

Join HWZ's Telegram channel here and catch all the latest tech news!
Our articles may contain affiliate links. If you buy through these links, we may earn a small commission.
Previous Story
Gmail's major redesign is here
Next Story
The Philips Momentum is a 43-inch HDR gaming monitor with a 1,000 nits peak brightness