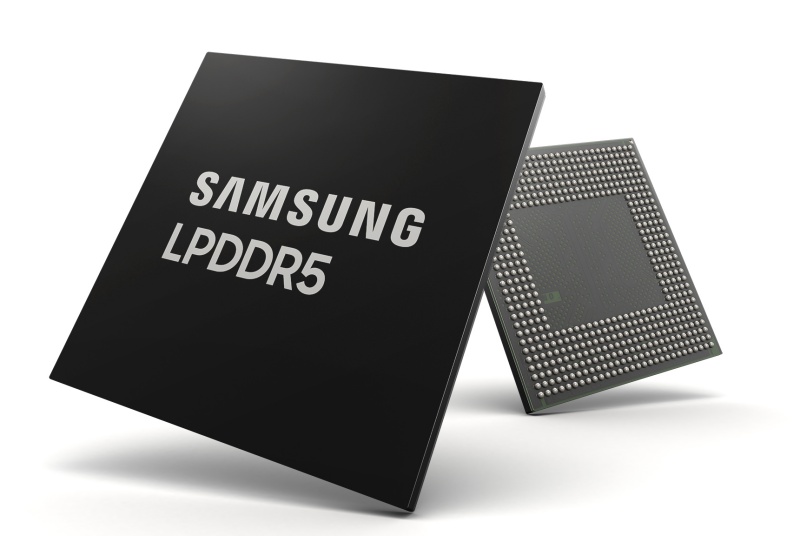 According to Samsung, the 8Gb LPDDR5 has a data rate of up to 6,400Mb/s which is 1.5x as fast as the mobile DRAM chips used in current flagship mobile devices (LPDDR4X, 4266Mb/s) such as the Galaxy S9. With the increased transfer rate, consumers can expect the LPDDR5 to send 51.2GB of data or 14 Full-HD video files (3.7GB each) in just one second!

The 8Gb LPDDR5 is available in two bandwidths; 6,400Mb/s at 1.1V and 5,500Mb/s at 1.05V. This makes it the most versatile mobile memory solution for upcoming smartphones and automobile systems.

The 10nm-class LPDDR5 boasts several low-power features such as pre-configuration to avoid overwriting cells with "0" values and a "deep sleep mode" to reduce power usage to half the "idle mode" of the current LPDDR4X DRAM. As a result , the 8Gb LPDDR5 DRAM offers power consumption reductions of up to 30%.

Samsung and the other leading global chip vendors have completed functional testing and validation of a prototype 8GB LPDDR5 DRAM package. The South Korean company plans to begin mass production soon and the first device to have it is likely to be the Galaxy S10.

Join HWZ's Telegram channel here and catch all the latest tech news!
Our articles may contain affiliate links. If you buy through these links, we may earn a small commission.
Previous Story
Google Maps now has a motorbike mode
Next Story
Full Galaxy Tab S4 specs may have been leaked