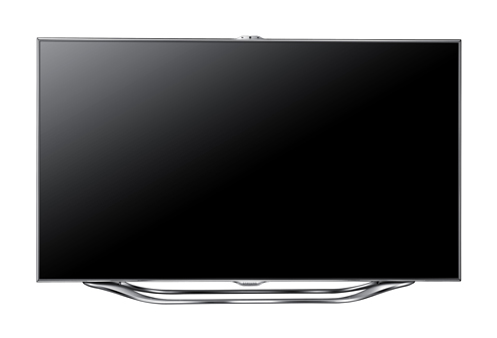 More OLED TVs are making an appearance at CES 2012, and it's no surprise to see another Korean company making the announcement. Samsung has unveiled its first 55-inch Super OLED TV, alongside its flagship LED TV for 2012, the Samsung UNES8000 (pictured above).

Belonging to Samsung's Smart TV lineup, the ES8000 LED TV is powered with a dual-core processor to handle its wide range of apps. Through Samsung Apps, users can access over 1,400 apps which includes the recognizable Angry Birds, Discovery Channel and many more. Samsung has also highlighted that its app platform has seen third-party developers growing from 550 to 25,000 in just two years. 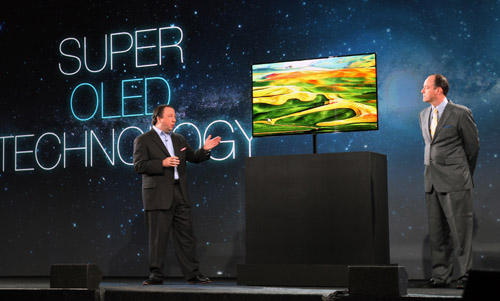 The real show stealer is Samsung's 55-inch Super OLED TV, bundled with Smart Interaction, Samsung Apps, 3D functionality and multitasking. Smart Interaction takes a more user-friendly approach to interact with the smart TV through voice and motion control, on top of the conventional control methods for the Super OLED TV. The 55-inch OLED will be produced from a single pane of glass, slated for production this year on an entirely new 8th generation fabrication line created exclusively by Samsung for OLED manufacturing.

According to Samsung, Super OLED offers response times over 1,000 times faster than LED, virtually eliminating motion blur even in the most action-packed scenes. Super OLED technology eliminates the need for a color filter as the OLED pixel unit consists of RGB sub-pixels - each emitting its own light. The technology is also able to differentiate varying degrees of blacks and shadows for better image quality on darker scenes.

Samsung's AllShare service, which lets you share content across Samsung's portfolio of devices, also got an update. Named AllShare Play, the updated service allows users to access their content through the cloud, be it from your TV, tablet, camera, phone or PC.

Interestingly, the new range of Samsung Smart TVs launched in 2012 will come with an upgrade option, dubbed as Evolution Kit. Thanks to its proprietary system-on-chip technology, Samsung TVs that are supported by the Evolution Kit can be upgraded to a higher specification by inserting a new module into a slot at the back of the TV. Though details were scarce, this is presumably related to the dual-core processor within the Smart TV, which can be swapped out for a faster processor.