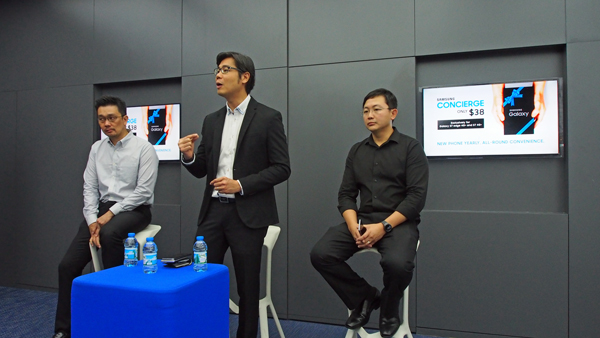 Buying a smartphone isn’t only about getting the latest devices with cutting-edge tech built-in. Samsung Singapore takes their Galaxy S7 and S7 Edge experience further by introducing a new premium program – the Samsung Concierge.

What is Samsung Concierge?

Samsung Concierge is a new after-sales initiative by Samsung, and it’s unique only to Singapore. By paying a one-time S$38 fee, Samsung phone users can get a host of premium perks and protective coverage for their Galaxy S7 and Galaxy S7 Edge devices, worth up to S$960 in total.

The perks include a S$350 waiver on yearly phone upgrades to the next eligible Samsung device, a 50% subsidy for all out-of-warranty repairs, one-to-one phone exchange for defective phones, and personalized assistance from Samsung Concierge Consultants who can do data transfers between phones at your request, or conduct same-day repairs at your doorstep.

If you've purchased the Galaxy S7 through a telco contract, this perk will entitle you to trade in the device after 12 months of age for a waiver of the phone upgrade penalty fee (which would normally apply when your contract period is between 12 to 21 months old). However, take note - this Samsung Concierge service perk will only be applicable for devices between the age of 12 to 20 months into the contract.

Those who purchase a new Galaxy S7 device from a Samsung Experience Store without telco contracts can enjoy up to S$350 off the list price of the next eligible Samsung phone after surrendering the old phone to the Samsung store. Like the above scenario, this perk is applicable for Galaxy S7 devices between 12 to 17 months of age since purchase of the device and the concierge service.

Samsung Concierge also offers a one-time 50% discount for any out-of-warranty repairs. This covers a host of disasters, including cracked screens and liquid damage (worth up to S$500 in value). It is applicable for 12-months from the purchase date of the Galaxy smartphone. Out-of-warranty repairs beyond the 12-month mark and subsequent repairs of this nature are still subjected to the full repair price.

The premium Samsung Concierge service also gives the new phone owner a 30-day exchange promise. There’s a one-to-one exchange provided within the first month of purchasing your new Samsung Galaxy S7 or S7 Edge phone, provided that the initial phone had functional defects. It does not cover accidental or other wear and tear related damages.

Transferring data, contacts and other important info from one phone to another can be a pain and a waste of time. Fortunately for the new S7 or S7 Edge user, Samsung Concierge will allow them to request for help with data transfer from Samsung’s Customer Service Consultants. The transfer will be done using Samsung Smart Switch.

Samsung Concierge members also get one complimentary personalized servicing session with a Samsung Concierge Consultant in the comfort of their own homes or at their office (worth up to S$110). This on-site perk covers repair trips and general assistance, and it is applicable to other Samsung Concierge perks listed above.

For example, if a user dented the SIM tray in their new Galaxy S7 or S7 Edge, they could call the 1800-SAMSUNG hotline and be directed to the Samsung Concierge program. The user could then request to use the complimentary on-site visit to get the SIM tray replaced. A date and time-slot is selected at the user’s request, and the Samsung Concierge Consultant will go over at the agreed date/time to service the phone. Samsung said that these on-site booking slots are available on weekdays and weekends from 10 A.M. to 8 P.M., excluding public holidays. 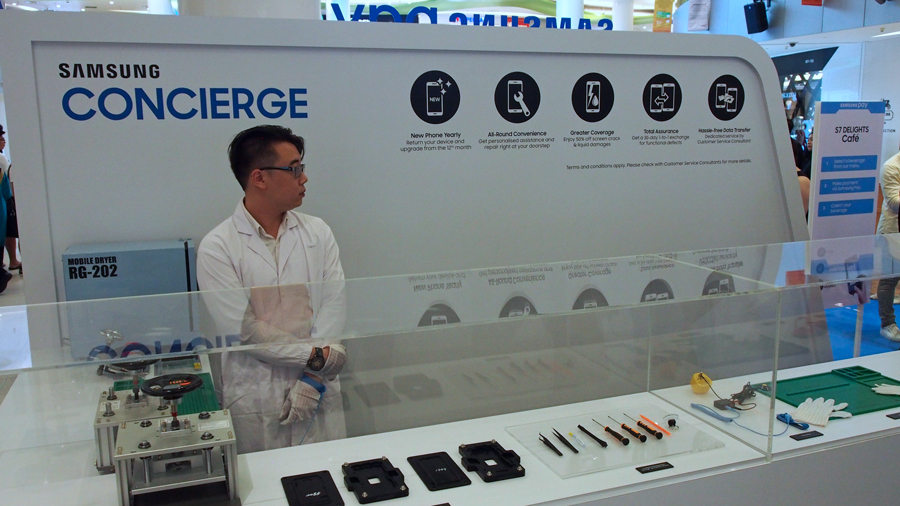 According to Samsung Singapore’s findings, approximately 70% of repairs related to their phones can be resolved in one hour, and 99% of repairs can be fixed within one day. The personalized assistance perk by Samsung Concierge is targeted to cut down the trips and hassle involved in getting servicing/repairs done. Each on-site visit that the Samsung Concierge Consultant will turn up in a uniformed Samsung outfit, together with proprietary tools by Samsung that are designed for proper handling and repair of the Galaxy smartphones.

More details of when and how the program will roll out would be shared when it's closer to the launch period. Owners of the new flagship have one more reason to rejoice and look forward to the concierge program to enhance their experience with the Samsung ecosystem.

Join HWZ's Telegram channel here and catch all the latest tech news!
Our articles may contain affiliate links. If you buy through these links, we may earn a small commission.
Previous Story
The ASUS VivoStick TS10 is one sleek and curvy PC-on-a-stick
Next Story
Delid your CPU with the Rockit 88 Intel CPU Delid tool!