Rumor: Details of AMD’s upcoming Vega GPUs have been leaked

Rumor: Details of AMD’s upcoming Vega GPUs have been leaked 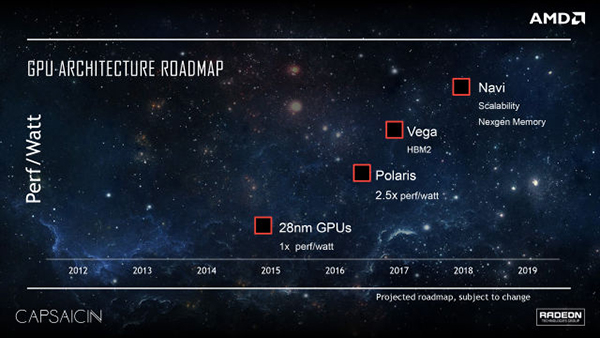 According to a report by VideoCardZ, some details of AMD’s upcoming Vega GPUs have been leaked. The new Vega 10 GPU is expected to take on the NVIDIA GTX 1080. As we all know, the AMD Vega GPU is slated for release on in early 2017.

With information gleaned from a leaked server roadmap, the Vega 10 GPU sports 64 Compute Units, and this should translate to 4,096 stream processors. Its performance is rated at 24 TFLOPs for half-point precision (16-bit) floating point operations. Its GPU is supposedly based on 14nm GFX9 architecture, and the GFX9 is an internal codename its architecture. It will feature 16GB of HBM2 video memory with a bandwidth of 512GB/s. At a glance, notwithstanding its whopping 16GB of VRAM, the Vega 10 GPU is similar to the Fury X GPU. But do note the latter sports only 4GB of HBM VRAM. The Vega 10 GPU has a rated TDP of 225W, which is lower than the 250W TDP of the Fury X.

Here’s where it gets even more interesting as VideoCardZ reveals its successor, the even more powerful AMD Vega 20 that will allegedly sport 7nm GFX9 microarchitecture, coupled with 32GB of HBM2 VRAM, with 1TB/s of bandwidth. Its rated TDP is a low of 150W, and it will support the new PCIe 4.0 interconnect standard. In terms of compute units, it will sport the same number, i.e., 64 CUs, as the Vega 10. Last of all, AMD intends to replace the Polaris 10 GPU with Vega 11 in 2017. The Polaris 10 GPU is the one that powers the AMD Radeon RX 480. The details of Vega 11 weren’t disclosed but VideoCardZ hazarded a guess that Vega 11 will be based on the same fabrication node (14nm) as the Vega 10.

And one more thing, according to VideoCardZ’s source, the Navi GPUs have been delayed for a year to 2019. They were initially slated for release in 2018.