According to X-bit Labs, AMD is rumored to be producing its second generation FX CPUs based on "Piledriver" architecture. The new architecture is purported to deliver a performance boost of 10 percent over the Bulldozer-based CPUs while simultaneously offering a 10 to 24 percent energy savings. 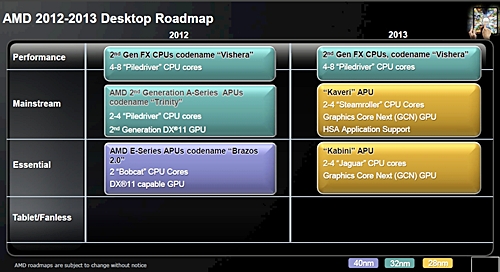 Last week, AMD announced its Trinity APUs, which are based on the Piledriver architecture as well. This new series of APUs is considered true second generation APU variety from AMD to replace Llano, targeting the same market segment, but with far more improved CPU and GPU components to bring about far better performance per watt with the best in-class entertainment and gaming experience.

The soon-to-be-launch desktop Piledriver-based CPUs are compatible with Socket AM3+ motherboards, making any CPU upgrading effort, just a drop-in affair. The AMD FX "Vishera" CPUs will sport up to four Piledriver modules (eight X86 cores) and dual-channel DDR3 memory controller. The new platform has its own codename "Volan" but according to X-bit Labs, it is also known as "Scorpius Refresh".

Donanimhaber indicated that the performance of AMD FX "Vishera" CPUs will be 15 percent higher compared to that of current generation Zambezi processors. Its earlier performance boost was estimated at 10 percent against the same Bulldozer CPUs.

We expect AMD to announce significant updates in the coming Computex 2012 trade show and although they're more mobile focused at the moment, we've a strong hunch that what's reported here is likely to come true. Stay tuned for more updates in a week's time.