Roccat has unveiled the Skeltr gaming keyboard, the world's first keyboard with a fully integrated smartphone docking module. The Skeltr allows you to use your touchscreen smartphone as a second-screen to add a variety of new in-game control options.

"Life doesn't stop because you're gaming. We receive calls, we make calls, we text. The Skeltr is the answer to a world where gaming, interacting with your friends, and utilizing a second-screen as a tool in the game arsenal makes a lot of sense, "says René Korte, CEO and founder of ROCCAT. "Our feedback-built Skeltr is Bluetooth compatible, allowing the smooth visualization of vital PC data to your smart device. It allows gamers to use their phones as a highly interactive compliment to the game they're playing. We also believe being able to use your keyboard to communicate on your smartphone is a no-brainer feature ROCCAT fans will deeply appreciate. Our designers worked very hard to make these integrative experiences that gamers can use second nature, without distraction." 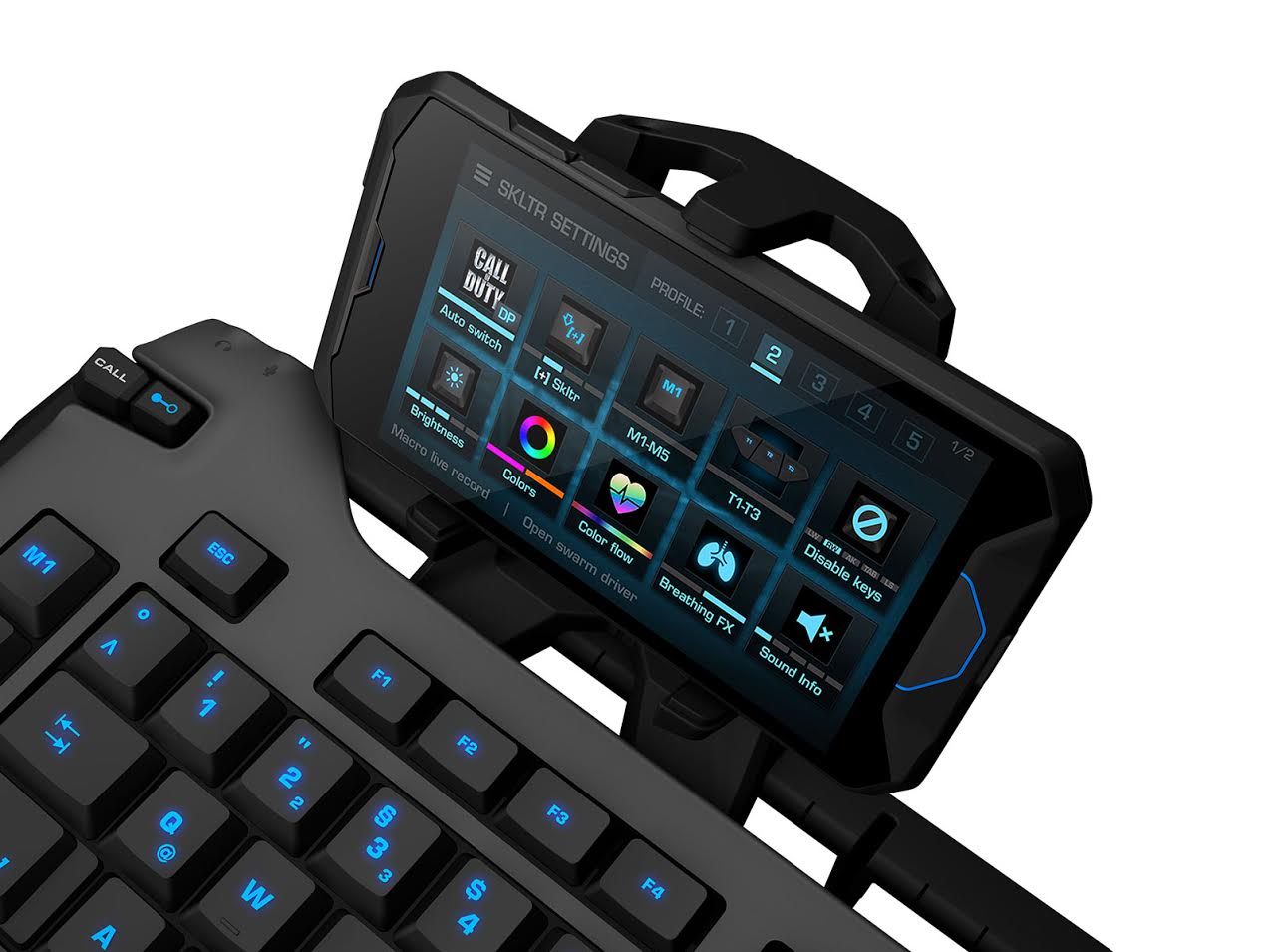 The Skeltr's sliding rail and rotating holster will ensure that it is compatible with every size smartphone. The keyboard itself also boasts RGB backlighting, anti-ghosting technology, and a built-in macros keys. René also mentioned "The Skeltr is our first foray into this new world of keyboard and smartphone integration, but it certainly won't be our last."

Along with the Skeltr, Roccat unveiled the Nyth modular MMO gaming mouse, a versatile gaming mouse with a customizable button grid on its side.

René said "We've wanted to develop our own MMO mouse for a long time, but like always, we end up seeing a bigger picture once we begin brainstorming. MMO mice have these massive button grids that are locked in. You can change the button functionality, but what if you don't like the layout? Our solution is a wholly modular MMO mouse, with interchangeable button combinations that suit the player. No two gamers are alike, and because we know that, we've gone many steps beyond just allowing them to switch out the in-package button options. Our fans will have access to our button inventory files, and those that are into 3D printing can even create their very own."

The Nyth has a replaceable side-part that is customizable to a gamer's needs, letting you switch it for MOBA style gaming, MMOs or even FPS.

Both the Skeltr and Nyth will be launched later this year.

Join HWZ's Telegram channel here and catch all the latest tech news!
Our articles may contain affiliate links. If you buy through these links, we may earn a small commission.
Previous Story
Symantec, Kaspersky downplay Beijing effort to exclude their products
Next Story
SingTel's broadband service down for its business users?