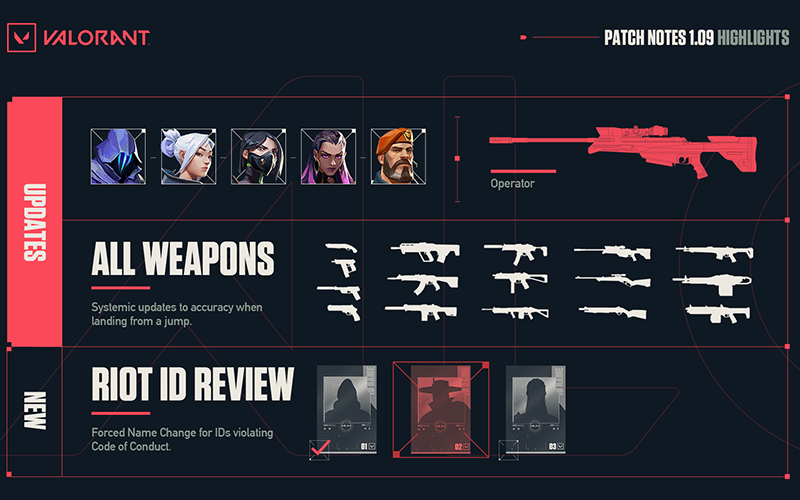 At long last, Valorant's Operator sniper rifle is getting nerfed. With its ability to kill in a single shot, the Operator has the capacity for super high-impact plays, and there has been a prevailing narrative that it was way too overpowered in its previous form. The release of patch 1.09 sees Riot knock the Operator down a notch, in addition to introducing tweaks to Omen, Jett, Reyna, Viper, and Brimstone.

Here's a rundown of the changes to the weapon:

Riot also prefaced the changes with a lengthy explanation from Lead Agent Designer Max "Orcane" Grossman – it clearly knows that these changes may be controversial, even if a significant portion of the community appears to have been clamouring for it.

In a nutshell, Riot wanted to retain the gun's ability to secure high-impact kills, while attempting to dial back the Operator-heavy meta and make it more punishing to miss your shot or re-peek an angle. With the price of the gun increased from 4,500 credits to 5,000, players who normally purchase the sniper rifle as early as Round 3 will find it harder to do so now. The whole point is to delay the appearance of the Operator, increase the penalty for dying with one in hand, and better balance the risk and reward of using it.

The nerfs to the Operator, such as the slower fire rate, decreased scope movement speed, and heavier movement penalty, also make it harder to use the weapon aggressively or recover from a missed shot. The gun is still deadly in the right hands, but it is now a bit more unforgiving and may force players to use it a bit more passively.

With regard to movement speed, Riot has also applied a similar treatment to all guns in the game, and they now remain inaccurate for longer after jumping. "We’ve noticed a trend where players landing from a jump are able to shoot accurately sooner than is reasonable," wrote Riot, which is why it's taking steps to make jump peeking easier to deal with.

Elsewhere, Riot has also applied a slight nerf to Reyna's Empress ultimate, lowering her fire rate bonus from 25% to 15%. Conversely, it is increasing the fire rate bonus of Brimstone's Stim Beacon from 10% to 15%. The goal is to bring the two abilities to parity, so players can better master the spray pattern changes arising from the game's only two fire rate buffs.

Jett received a nerf too, and her Blade Storm Burst Fire now has damage falloff at 12m, dropping all the way to 35 damage at max falloff. The time between consecutive Burst Fire uses has increased from 0.33s to 0.45s as well, and the headshot multiplier has been reduced from 3x to 2x.

Finally, Viper got buffed yet again as Riot attempts to improve her viability in the current meta. She now starts with 100 fuel instead of 50, and Snake Bite adds vulnerable debuff that lingers for 2s after leaving the acid. Her Viper's Pit ultimate now has double the movement speed while casting, and she fast equips her weapon after casting, which could make it easier to use while in a pinch.