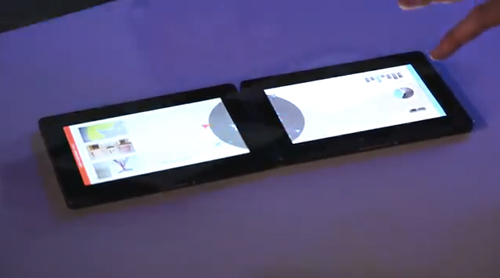 Here's some bad news for those who are waiting to see a BlackBerry 10 OS demo. At MWC 2012, Research in Motion (RIM) was particularly mum about their new QNX-based OS for their BlackBerry smartphones. Instead, the company showcased a new software concept that enhances the BlackBerry Playbook's usability.

One such demonstration was the Confetti concept. The sharing feature, which is enabled via the PlayBook's Wi-Fi and camera module, is touted as an option for multiple PlayBook users to share and collaborate notes and materials in a meeting. In the demo, we noticed how each PlayBook is designated by a color code, and each PlayBook is tracked via its camera and knows the relative position of the other PlayBooks.

Once everyone has joined the meeting via the Connection Mode, a countdown begins and all the PlayBooks are in a file-sharing mode. The interface shows where each PlayBook is via a colored dot, and once a PlayBook is moved, the colored dot also moves accordingly.

File sharing is done simply by dragging the file towards the colored dot, which will see the same file appearing on the corresponding PlayBook. Should a PlayBook zoom into a particular image, the other tablets will also see the same action reflected on their screens. Alternatively, one can simply swipe down and stream the presentation to a larger screen connected by the Wi-Fi access point.

Meanwhile, RIM also showcased another concept named PitchRocket that lets BlackBerry users create presentation slides straight from their BlackBerry smartphones. With various standard templates available, all you need to do is enter the relevant text on your smartphone to create the slides.

Join HWZ's Telegram channel here and catch all the latest tech news!
Our articles may contain affiliate links. If you buy through these links, we may earn a small commission.
Previous Story
Intel Clarifies Ivy Bridge Delay Rumors
Next Story
The Pirate Bay Clears Out Its Torrent Files