Rey's fancy switchblade lightsaber is available to buy at an insane US$1,599

Rey's fancy switchblade lightsaber is available to buy at an insane US$1,599

Note: This article was first published on 17 December 2019. 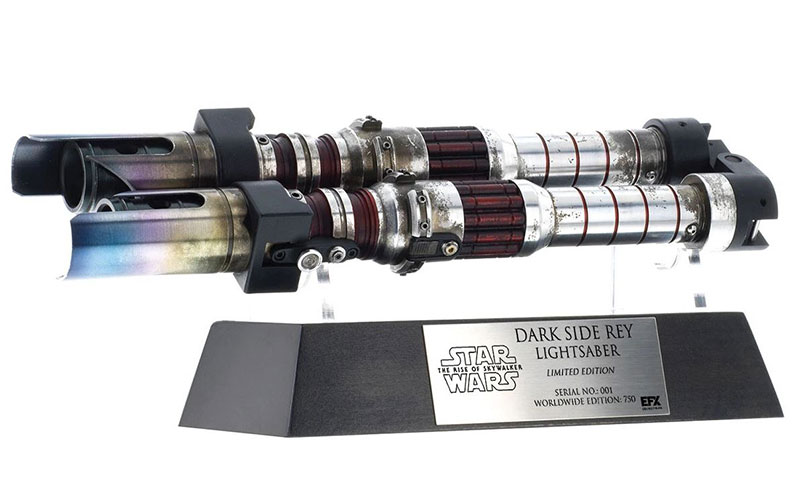 Remember Rey's double-bladed lightsaber from the clip Disney unveiled at D23? It featured shots from earlier Star Wars films, but it also contained teasers for The Rise of Skywalker, most notably Rey's red Sith-style switchblade saber.

As it turns out, you'll now be able to buy a 1:1 replica of this super cool – albeit questionably designed – saber, courtesy of EFX Collectibles. How much will it cost you to own this piece of Star Wars memorabilia? Only US$1,599.99, via Chronicle Collectibles' website.

The Dark Side Rey Lightsaber is machined out of solid aluminum with all metal detail pieces in place. It's supposedly based on a detailed study of the actual prop and reference materials supplied by none other than the Lucasfilm production team, and it retains details such as the weathered look of the original. In addition, the hinge mechanism is the same as the one used in the film prop.

Unsurprisingly, it's also a limited edition model with only 750 pieces available worldwide, making it a super rare collector's item. You'll of course want to show this off if you pick one up, and the included hardwood display base can display the lightsaber in both its configurations.

The only thing it doesn't appear to come with is the blade, but most replicas don't feature this anyway.

Previous Story
Holiday Gift Idea 8: Immerse yourself in your favourite game with this curved 240Hz screen
Next Story
The iPhone XR has been the best-selling phone for four consecutive quarters