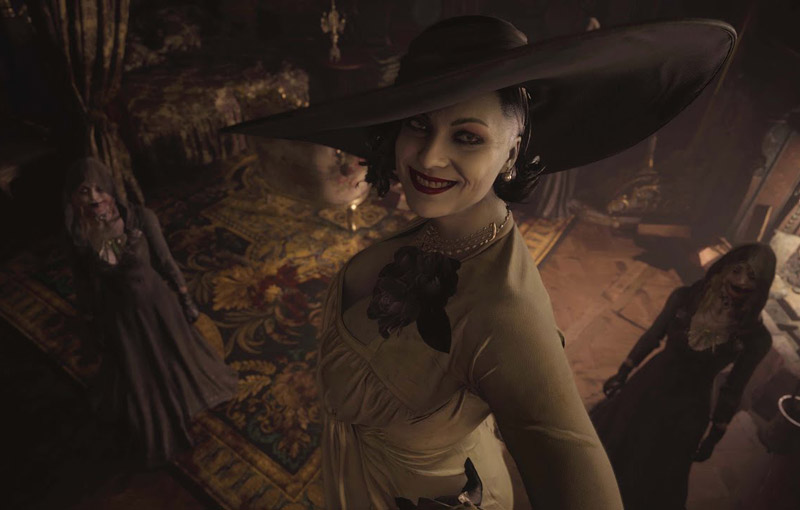 Capcom just held a Resident Evil Showcase earlier today, revealing a ton of information on Resident Evil Village - including a release date! The Resident Evil 7 sequel will see Ethan Winters enter a snowy environment and explore a huge castle, filled with vampire ladies made of bugs. So, you know, just another Tuesday for this poor guy.

The first thing we got was a new trailer and gameplay video, showing off more of this game’s Gothic environments. Ethan Winters has been pulled out of a peaceful life with his wife Mia by Chris Redfield, the former Resident Evil protagonist who seems to be embracing a much darker path in this game. The trailer introduces us to the ‘masters’ of a castle, a few vampiric women made of bugs and Lady Dimitrescu, the spooky leader of the bunch. She also has claws, as if the vampire stuff wasn’t scary enough.

The developers made sure to emphasise that Resident Evil Village’s combat is going to function a little differently compared to Resident Evil 7, despite the first-person perspective making a return. You’ll have to guard against enemies a lot more, and push them back to get some space. In a portion of the trailer that was sneakily skipped over, an enemy dropped an axe that could be picked up - suggesting that we’ll get to play with melee weapons other than tiny knives this time around.

Check out the gameplay segment below:

Besides the normal pistol and shotgun, Ethan can also use a new rifle in combat. A Resident Evil 4-like merchant character named Duke rolls up in a wagon to help Ethan upgrade his arsenal and buy other helpful items, using a new kind of in-game currency. Crafting and Resident Evil 4’s Tetris-like inventory management system also return. The enemies we fight here are a lot more like classic zombies than the weird Molded types we encountered in Resident Evil 7, and it looks like the vampire family won’t even be the primary antagonists. Lady Dimitrescu still reports to an enigmatic ‘Mother Miranda’, whom we haven’t met yet.

Here’s a trailer for Resident Evil Re: Verse:

All the characters come with the same visual designs and combat animations as the recent Resident Evil games, so one can assume that Capcom pulled this together in a short amount of time just to extend Resident Evil Village’s longevity. Bizarre cel-shaded visuals accompany the game, and players will fight in an arena based on Resident Evil 2’s Raccoon City Police Department. Enemies from recent games like the Hunter Gamma and Molded will also be tossed in, presumably as AI-controlled opponents.

If I sound sceptical, it’s only because Capcom hasn’t been able to make a good Resident Evil multiplayer experience in years, and last year’s Resident Evil: Resistance certainly didn’t convince me otherwise. A closed beta of the game will begin on January 28, 2021 for PlayStation 4 and Xbox One players, and you can apply to join that here.

Resident Evil Village will launch on May 7, 2021 on PlayStation 4, PlayStation 5, Xbox One, Xbox Series X and PC. According to the showcase, Capcom has been working hard to make sure the game runs well on last-gen consoles. Anyone who purchases the game on PlayStation 4 and Xbox One will get the next-gen version for free. Ubisoft’s The Division 2 is also getting some Resident Evil cosmetics, to celebrate the franchise’s 25th anniversary.

Surprisingly, Capcom also released a PlayStation 5 demo of Resident Evil Village today for free, entitled ‘Maiden’. The demo will act as a prequel to the events of the full game, putting you in the shoes of someone trying to escape the castle. It’s about 20 minutes long, and we’ll have our impressions of it up soon!

Our articles may contain affiliate links. If you buy through these links, we may earn a small commission.
Previous Story
Poly launches the Poly Sync family of smart, USB and Bluetooth speakerphones
Next Story
New Epson SMB focused EcoTank printers again look to lower costs for companies