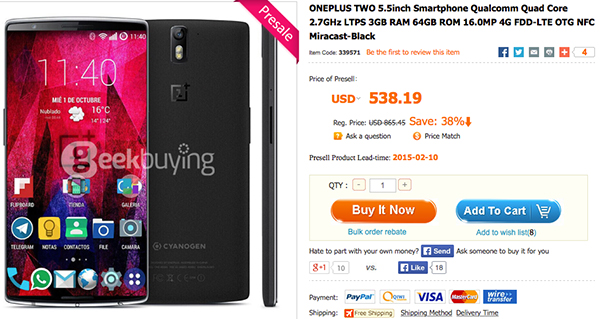 Earlier this month, Carl Pei, Director of OnePlus Global, confirmed that OnePlus Two (that is, the successor to OnePlus One) will land in Q2 or Q3 of 2015.

Immediately after that, online store Coolicool listed the device on its website, and claimed that OnePlus Two will pack a Qualcomm Snapdragon 805 processor, 5.5-inch display, 32GB storage, 16MP rear camera, and 3,300mAh battery.

Now, GeekBuying, another online retailer, has put up an even more detailed list of specs. According to them, the OnePlus Two’s Snapdragon 805 processor will run at 2.7GHz. It also has 3GB of RAM, and the 5.5-inch display is still a 1080p panel. Also, the 16MP rear shooter will sport an F2.0 aperture, and the device will run a version of Color OS that’s based on Android 4.4. (Not Lollipop? That can’t be!) GeekBuying has slapped a US$538 pre-order price on its version of OnePlus Two, and is expecting to ship it in February 2015.

We don't know about you, but we're hoping these rumors are wrong. Primarily because it doesn’t sound like much of an upgrade to the OnePlus One. At best, this is a OnePlus One Plus. And February is definitely not Q3. We certainly hope the Q3/Q4 timeframe still stands, because that gives OnePlus more time to build a better phone. That being said, a faster processor, a better camera, and a bigger battery sound just about the right things a phone maker would aim for year after year.

Join HWZ's Telegram channel here and catch all the latest tech news!
Our articles may contain affiliate links. If you buy through these links, we may earn a small commission.
Previous Story
Seagate aims to offer budget 10TB HDDs by 2016
Next Story
What is 'Spartan'?