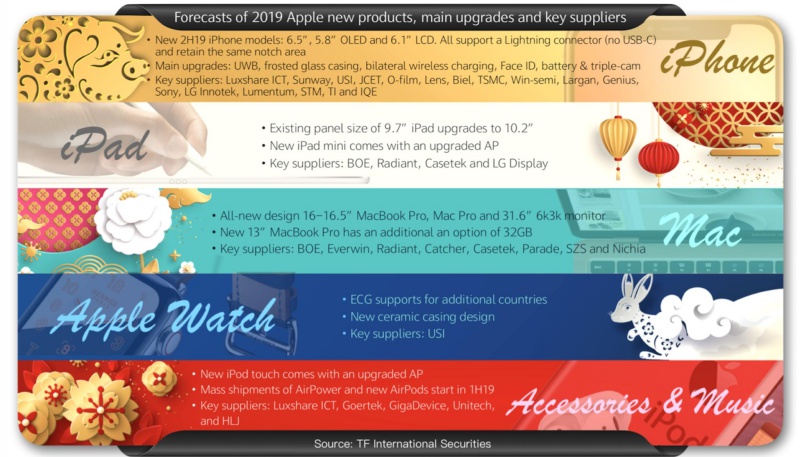 Ming-Chi Kuo, who is known for his accurate insights on Apple’s upcoming products, shares his research note detailing on what to expect later this year.

Starting with the Mac lineup, Kuo believes there would be MacBook Pro with all new-design and a display between 16 and 16.5-inches. The 13-inch MacBook Pro could be offered in a 32GB RAM option. Moving onto displays, Kuo said that Apple would be launching a 31.6-inch 6K display with a Mini LED-like backlit design.

As for the iPhone, Kuo does not expect Apple to switch to USB-C. Screen sizes will remain the same at 5.8-inches, 6.1-inches and 6.5-inches. Unfortunately, there is unlikely to be a smaller notch on the new iPhones.

Apple is also said to continue using LCD for the 6.1-inch model. The 6.1-inch is expected to come with 4GB RAM and all models are likely to sport frosted glass casing. Bigger battery capacity is also expected to support new technologies such as the ability to wirelessly charge other devices and indoor positioning.  Face ID will be improved with higher power flood illumination and at least one model will have a triple-lens setup.

For the iPad, Kuo stated that there could be two new iPad Pro models, a 10.2-inch model and a refreshed iPad mini. The 10.2-inch model would replace the 9.7-inch iPad, which suggests a new design with slimmer bezels.

The upcoming Apple Watch will come with a new ceramic casing design and the ECG function is expected to roll out to more countries by the end of the year. The AirPower, the AirPods 2 and a new iPod Touch will be released later this year as well.

Join HWZ's Telegram channel here and catch all the latest tech news!
Our articles may contain affiliate links. If you buy through these links, we may earn a small commission.
Previous Story
Apple hires former Microsoft exec to lead smart home efforts
Next Story
Apple’s former senior corporate lawyer has been charged with insider trading