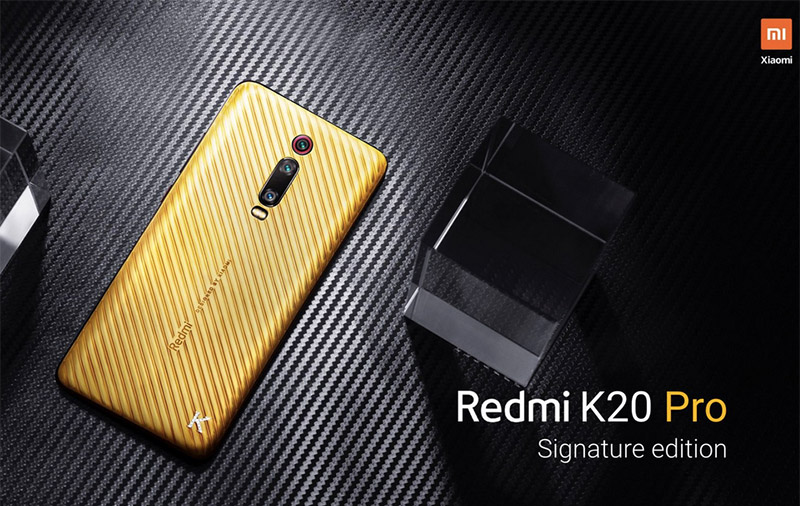 In late May, Xiaomi launched the Redmi K20 series, which comprises of the standard K20 and the K20 Pro.

Designed for those looking for an affordable flagship phone, the K20 Pro, which starts at 2,499 CNY (about S$500) does come with some impressive specs, including a 6.39-inch AMOLED screen, an in-display fingerprint sensor, Qualcomm’s Snapdragon 855 SoC, three rear cameras (48MP + 13MP + 8MP), and a 4,000mAh battery that supports 27W fast charging.

In short, on paper, the K20 Pro looks value for money. But if for some reason you like the phone so much and don’t mind paying crazy money for it, know that Redmi India has just announced a K20 Pro Signature Edition that goes for ₹4,80,000, or about S$9,500.

To justify this kind of price for what’s still a Redmi phone, the K20 Pro Signature Edition is made of real gold (not gold plated). It’s also decorated with diamonds, which as far as I can tell from the pictures are on the “K” logo on the back of the phone.

Expectedly, this is a one-off customization. Redmi India says the it’s only making 20 sets of this gold phone.

Join HWZ's Telegram channel here and catch all the latest tech news!
Our articles may contain affiliate links. If you buy through these links, we may earn a small commission.
Previous Story
Huawei is rumored to be launching a Nova 5i Pro soon
Next Story
Belkin launches three new Qi wireless chargers that work with iPhone