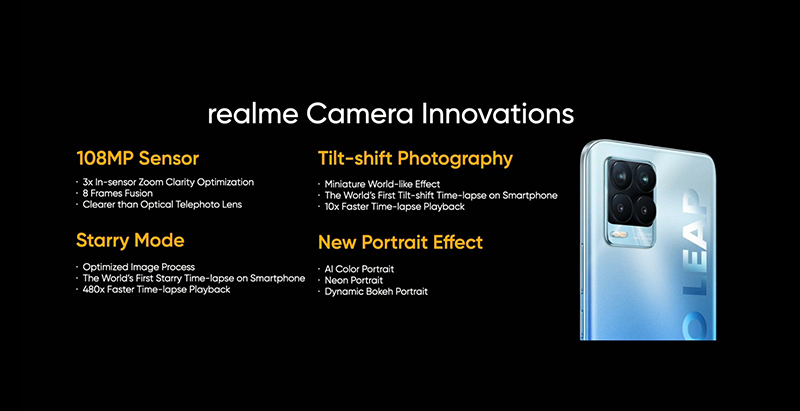 Through an online announcement, Realme shared a host of camera hardware and software enhancements they are bringing to their upcoming phones. The Chinese smartphone maker said they would be using the Samsung ISOCELL HM2 camera sensor for their phones. There's plenty of detail on the sensor in the URL above, so if you want to know more beyond its 108MP capabilities, do take the time to read.

According to Realme, the company's latest camera innovations will be available on the Realme 8 series of handsets. The video announcement showcased the photo-taking capabilities with a Realme 8 Pro, which has yet to launch.

Realme's optimisations include an in-zoom sensor, which is a different animal from typical digital zoom techniques. Conventional digital zoom takes a section of the full sensor's intake (in this case, 108MP) and crops into the sensor's section for the image. In-sensor zoom offers higher clarity by combining zoom hardware and lowering the shot to 12MP before shooting multiple times to achieve the full sensor size's place. That fills up the sensor with the zoomed area. Starry Mode, a night mode for shooting photos of the stars at night, is now available in its time-lapse video recording feature. Another feature is Tilt-shift Photography. This is popularised by miniature photography, where the bokeh effect is strengthened in the top and bottom of the image to create a miniature effect. The built-in feature has real-time bokeh for previewing and adjustments before confirming the shot. This also offers tilt-shift photography in video recordings on the Realme 8 devices. For Portrait shots, Realme phones will get additional built-in filters like Neon, Dynamic Bokeh (bokeh in straight lines), and AI Colour (black-and-white for background, the subject is in colour).

Join HWZ's Telegram channel here and catch all the latest tech news!
Our articles may contain affiliate links. If you buy through these links, we may earn a small commission.
Previous Story
The Sinking City developer Frogwares says publisher Nacon cracked and pirated its game
Next Story
Pokemon Brilliant Diamond and Shining Pearl will arrive for Nintendo Switch in late 2021