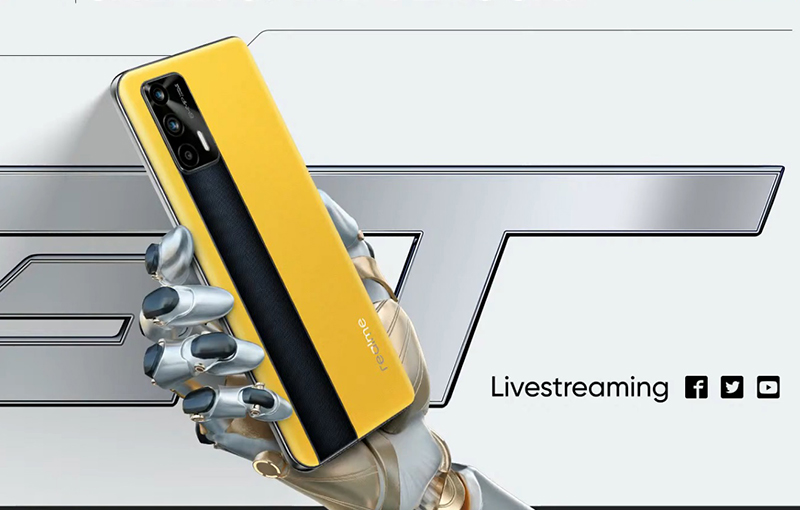 Realme GT’s design language is based on speed, which speaks for its track-like accents on the phone's rear. Of its three colours, the striking Racing Yellow colourway is Realme GT’s signature look, where the phone uses a dual-tone, vegan leather rear and aggressive yellow hues to appeal to younger phone users.

We mentioned that the Realme GT is the brand’s 2021 flagship device. That's because the phone packs a Qualcomm Snapdragon 888 chipset, putting it on par with the Xiaomi Mi 11, ASUS ZenFone 8, Samsung Galaxy S21 series, and Oppo Find X3 Pro in processor quality. It’s accompanied by UFS 3.1 internal storage and LPDDR5 RAM, which is also on par with current-gen flagship Android phones for efficient read/write memory speeds.

Realme’s tweaks to the chipset are its enhanced cooling capabilities. The phone has a stainless steel VC cooling system to aid with heat dissipation. Realme said that it offers 50% increased cooling power compared to copper-based VC cooling, up to 15°C reduction on the CPU.

Also, the use of SD888 makes the Realme GT compatible with 5G networks currently in use.

On the front is a 6.43-inch Super AMOLED display rated at 2,400 x 1,080 pixels resolution (FHD+) with up to 120Hz refresh rate and 360Hz touch sampling rate - the panel’s specs makes it clear that Realme expects the phone’s users to be heavily into mobile gaming. It also packs 4,096 levels of auto-brightness aided by dual light sensors on the front and back of the device.

In the battery department comes 4,500mAh with 65W SuperDart fast-charging. Realme's said that its charging specs offer a fast-charging rate of 0-100% in 35 minutes. There’s no mention of wireless charging, either.

Join HWZ's Telegram channel here and catch all the latest tech news!
Our articles may contain affiliate links. If you buy through these links, we may earn a small commission.
Previous Story
The next Samsung Unpacked event could be in the first or second week of August
Next Story
Diablo II: Resurrected reopens the infernal gates on 23 Sep