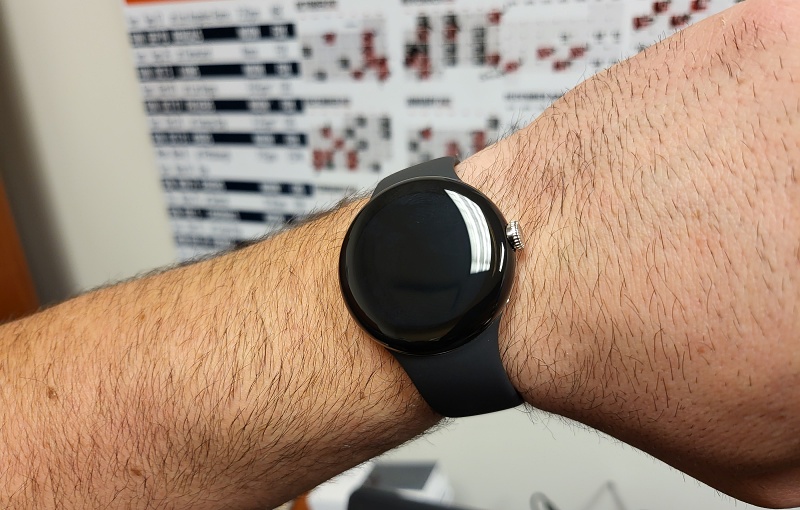 Days after the Google Pixel Watch was found at a restaurant in the U.S, a tipster published real-life photos of the smartwatch with its band on the wrist.

According to tipster u/tagtech414, the silicone watch band is about 20mm and has a proprietary connector that he described as being "kind of a pain to attach the first time". However, the band feels extremely secure after he figured out how to properly attach it.

He added that it is "the most comfortable watch" he has ever worn, and he would have no issue wearing it for long periods of time or at night for sleep tracking. Other observations include the crown not poking into the back of his hand when bending the wrist back or typing, and the band having a good flex and resistant to fingerprints or smudges. Google recently filed a trademark application for Pixel Watch with the U.S Patent and Trademark Office. The real life photos are similar to the leaked marketing images and renders shared by Jon Prosser. The Pixel Watch is tipped to launch next month at Google's I/O 2022 event and may cost more than a Fitbit.

Join HWZ's Telegram channel here and catch all the latest tech news!
Our articles may contain affiliate links. If you buy through these links, we may earn a small commission.
Previous Story
EnGenius announces its first Wi-Fi 6 wall-plate access point and it looks sleek
Next Story
v-Color's fast 6400MHz DDR5 Manta XPrism RGB memory kit might be the X-factor that your new system lacks