Reading Rainbow Kickstarter Campaign Has the Most Backers to Date

Reading Rainbow Kickstarter Campaign Has the Most Backers to Date 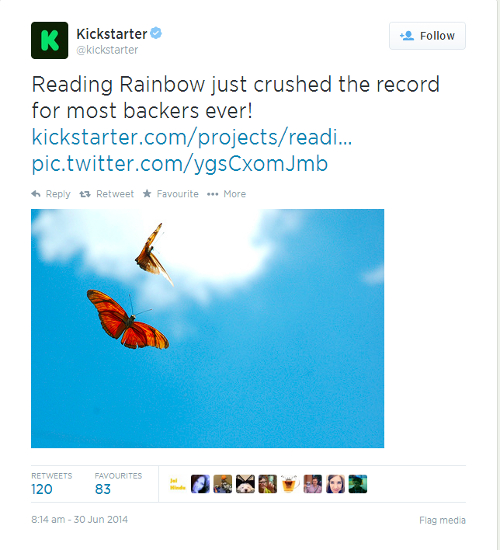 Reading Rainbow, an American TV series that encouraged children to read, was cancelled in 2006. But its host, LeVar Burton, still hasn't thrown in the towel. He recently launched a Kickstarter campaign asking for $1 million to bring the Reading Rainbow program to underfunded schools, as well as developing an app for mobile devices and tablets. The campaign has received close to $5 million in funding, and to top it off, has also broke the record for the most backed Kickstarter campaign ever, with more than 91,000 backers. Spurred on by its success, the teams behind the other top four Kickstarter campaigns (Pebble, OUYA, Pono and Veronica Mars) have all created limited edition rewards to help with the campaign. Head on to Kickstarter if you feel like chipping in.

Previous Story
Apple Wants iTunes U to be the Only Education App You'll Need
Next Story
Microsoft Shelved Plans for the Surface Mini Due to Lack of Confidence?