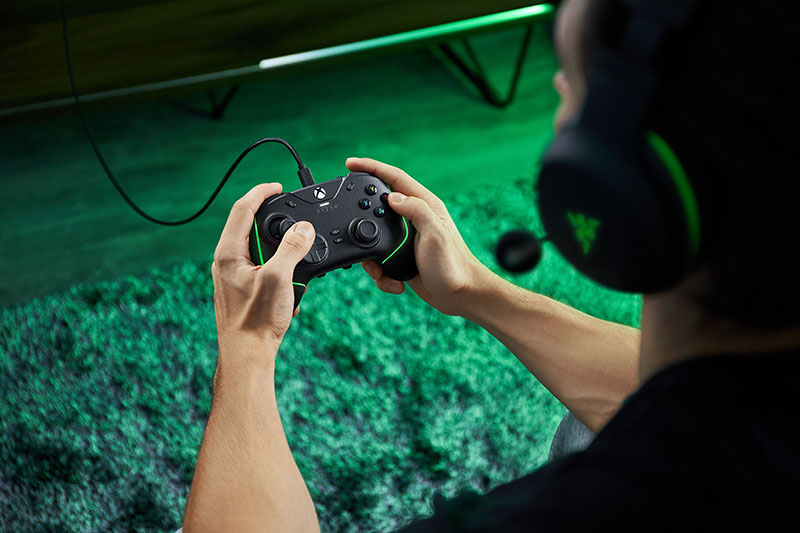 With the Razer Wolverine V2 coming on to a year old, it seems the company has deemed it an appropriate time for a refresh. Razer has launched the Wolverine V2 Chroma controller for Xbox Series X|S, Xbox One consoles and PC.

The most notable change is in the name; the Wolverine V2 Chroma now supports Razer’s Chroma RGB lighting through the two light strips flanking the face of the controller, with the RGB adjustable via the Razer Controller Support for Xbox app - available on both the Xbox Store and Microsoft Store for PC.

Other quality of life improvements include interchangeable thumb stick caps, a feature last seen on the Wolverine Ultimate controller. For gamers who take their controller customisations seriously, there are two additional thumb sticks included in the box; one of them being tall and recessed and the other set having short and domed shapes, whichever floats your boat.

Razer has also upped the number of multi-function buttons. Four more buttons have been added at the back of the controller, which, like the two bumpers already at the top of the controller, can be reprogrammed via the Razer Controller Setup app. Finally, the fixed cable has been replaced with a detachable USB-C one, though wireless connectivity is oddly unsupported.

The Hair Trigger Mode, which adjusts the pull distance on the triggers for longer or shorter pulls, is also still here, along with the stop switches that turn the mode on and off. The 3.5mm audio jack has also been retained.

The Wolverine V2 Chroma retails at a whistle-blowing S$229.90, which is a big S$70 top-up from the controller's predecessor. The controller isn't for every gamer, of course. But I suspect that if shooter or fighting games on consoles is your type of gig, then the Wolverine V2 Chroma with its plethora of customisable and low-travel buttons (as compared to the original Xbox Series X controller anyway) could give you that bit of an unfair advantage. The controller is available on Razer's website, Razer Shopee MallRazer Lazada Flagship Store, Razer Stores and authorised retailers.

Join HWZ's Telegram channel here and catch all the latest tech news!
Our articles may contain affiliate links. If you buy through these links, we may earn a small commission.
Previous Story
Samsung Galaxy A52s 5G is official with Snapdragon 778G and 120Hz display (updated)
Next Story
PUBG: NEW STATE's pre-registration count has surged past 40 million