Razer always has something impressive to show off at CES, but this year they've really outdone themselves. Project Valerie is a crazy gaming laptop with three built-in 17-inch 4K displays. Open the laptop and the two side screens automatically deploy by sliding out the side.

Each of the laptop’s three monitors is a 4K IGZO display, and they’re all managed by NVIDIA’s G-Sync monitor technology to ensure the multi-display action works perfectly. To complement the immersive setup, Project Valerie supports NVIDIA Surround gaming with an 180-degree field of view.

The concept laptop is loaded up with the same specs as Razer's Razer Blade Pro laptop, with an NVIDIA GeForce GTX 1080 graphics card with 8 GB of video RAM, 32GB RAM, and the same vapor-chamber cooling rig found in the single-screened Blade Pro.

Like the rest of Razer's laptops, the Valerie uses a black unibody aluminum chassis. Those extra screens add a lot of weight and thickness though, and the Valerie is around 38mm thick and weighs over 5kg! There's a surprisingly compact-looking power brick that goes with it, but we shudder to think about what the battery life will be like without it. 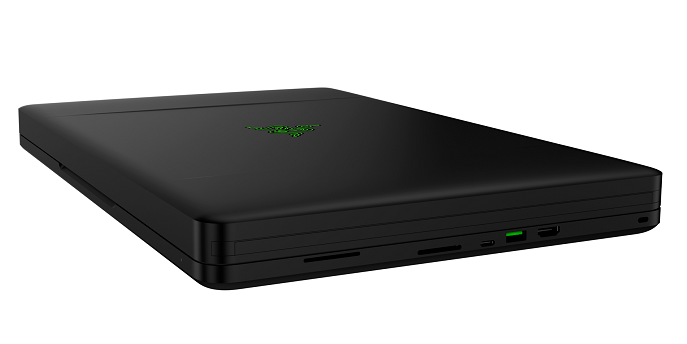 No word yet on whether the Valerie will ever actually be available to buy, but if it does, expect it to be extremely expensive.