Razer has its first gaming monitor with the Raptor, a 27-inch 144Hz display

Razer has its first gaming monitor with the Raptor, a 27-inch 144Hz display 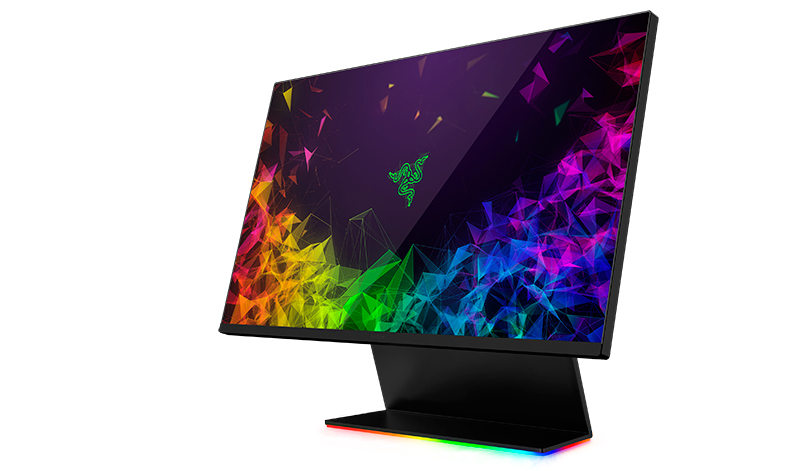 At CES 2019, Razer announced its intention to take on a whole new product category. The Razer Raptor is the company's first gaming monitor, and it features a lot of what enthusiasts want these days, including a crisp 2,560 x 1,440-pixel resolution and a 144Hz refresh rate.

It also uses an IPS panel for better viewing angles and color reproduction, and Razer is claiming up to 95 per cent coverage of the DCI-P3 color space. In addition, it has a peak brightness of 420 nits, so no one is going to accuse it of being dim.

Razer says HDR is supported, but it did not specify which HDR standard.

In typical Razer style, the Raptor boasts a sleek, modern design and thin 2.3mm bezels. It features a forged aluminum base and a backplate that's a unique blend of both fabric and metal, a nice departure from the plastic that makes up so many monitors today. On top of that, there are of course Chroma-powered LED strips along the monitor's base, which can be customized using Razer's Synapse 3 software and synchronized with other Chroma hardware.

The monitor stand supports height adjustments, but you can also tilt it backwards by up to 90 degrees to more easily access the I/O ports. The Raptor will come with one HDMI 2.0, one DisplayPort 1.4 input, one USB-C port with support for DisplayPort and Power Delivery, and two USB 3.0 passthroughs.

One nifty feature is the inclusion of an integrated cable management system at the back. The monitor comes with flat, Razer-green cables snaking out the back which support power, HDMI, DisplayPort, USB-C, and USB-A inputs. This means you can hook up your stuff to the Raptor without spoiling the design and achieve a neater setup, with each cable sitting snug in its own CNC-milled channel. On the software side, the Raptor will support picture-in-picture input capabilities, so you can work with multiple sources at once. In fact, if you have a Razer Phone 2, you can mirror its screen on the Raptor using the USB-C port.

The only thing that's missing is support for NVIDIA G-Sync, but there is still support for AMD's FreeSync technology.

However, the Raptor is actually debuting at CES as a prototype design, but the good news is that the monitor is expected to hit retail channels later this year in the US and Canada. It will be priced at US$699.

Join HWZ's Telegram channel here and catch all the latest tech news!
Our articles may contain affiliate links. If you buy through these links, we may earn a small commission.
Previous Story
Samsung Galaxy Note9 (128GB) is now available in Alpine White
Next Story
DJI’s new Smart Controller lets you fly drones without needing your phone