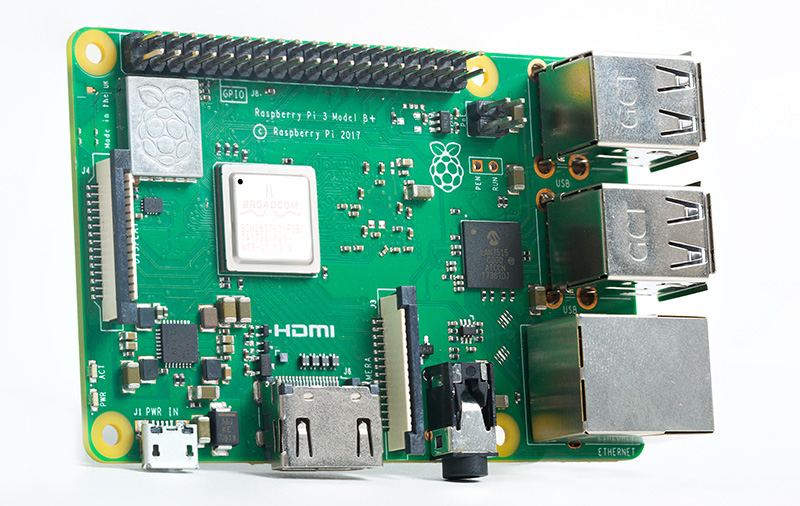 Available for US$35, the same price as the Raspberry Pi 2B and 3B, the updated 3B+ is powered by a 64-bit quad-core ARM Cortex-A53 CPU running at 1.4GHz. This is the same processor as the one in 3B, but is clocked higher (1.4GHz vs. 1.2GHz) thanks to power integrity and regulation improvements made to the package. The amount of RAM remains at 1GB.

The Pi 3 Model B+ also comes with dual-band 802.11ac Wi-Fi and Bluetooth 4.2 support. Versus its predecessor, you’re looking at slightly faster throughputs in the 2.4GHz band but way better performance in the 5GHz band. The Ethernet controller is also new and now supports gigabit Ethernet, but since this is piped over USB 2.0, bandwidth is limited by the USB 2.0 connection. Still, you should still see a nice bump (from 90+Mb/s to 300+Mb/s).

Power-over-Ethernet support is also present on the 3B+, and there’s a new 4-pin header on the updated board. A PoE HAT that enables powering of the 3B+ from a 48V PoE supply will be released soon. The 3B+ continues to support PXE Ethernet boot, with the bootrom updated with new fixes. The updated bootrom also contains fixes that will allow USB mass-storage booting to work with more drives.

At the moment, the Raspberry Pi Foundation isn’t discontinuing any earlier Pi models. Because the 3B+ sips more power, I can imagine the existing 3B to remain attractive for enthusiasts and industrial users.