Next-generation 5G networks are supposed to leave existing 4G LTE technology in the dust, but it’s difficult not to be sceptical about the real-world speeds you’d get on congested networks.

To help dispel these doubts, Qualcomm ran a couple of tests that simulated real-world conditions in Frankfurt and San Francisco, utilizing the actual locations of cell sites and spectrum allocations in both cities. This then enabled Qualcomm to estimate the speeds that real users would encounter.

These tests are also based on the 5G NR, or New Radio, networks that are within closer reach (these could roll out as soon as next year), and not the true standalone 5G networks that would mark a proper transition to the new standard.

That said, if the results of these simulations are anything to go by, there’s still good reason to look forward to a future of blazing fast speeds on our smartphones and other mobile devices.

The Frankfurt simulation was operating on 100MHz of 3.5GHz spectrum, with an underlying Gigabit LTE network working across five LTE spectrum bands. However, even though this is the less advanced of the two models, the improvements were still pretty impressive.

Burst throughput jumped from 10.2Mbps for an LTE Cat 4 user to 381.8Mbps on 5G NR. Furthermore, when streaming video, the 5G user was able to sustain playback at the maximum bit rate 100 per cent of the time. 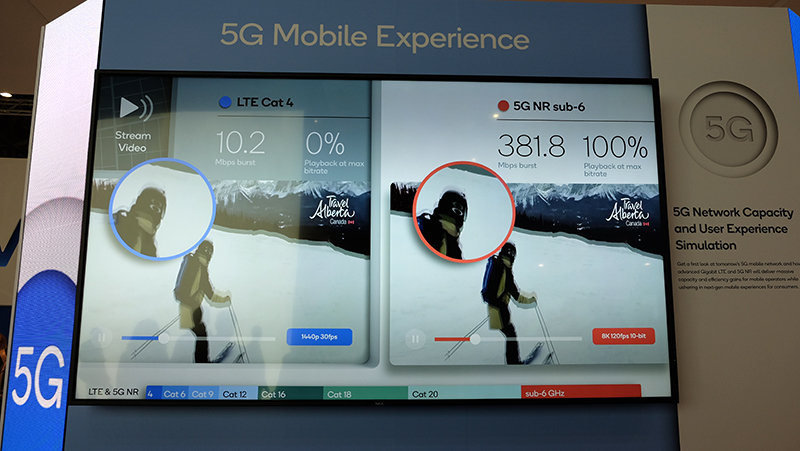 What’s particularly encouraging is that you don’t necessarily need to be working under optimum conditions to see a tangible gain. Qualcomm showed me figures for the 10th percentile of users, this time pitting faster LTE Cat 20 against 5G NR.

Even then, the 5G NR user enjoyed speeds that were over twice as fast, with speeds of 99.8Mbps versus 45.9Mbps. If both users were to download a movie, the 5G NR device would do it in about half the time as the 4G device. 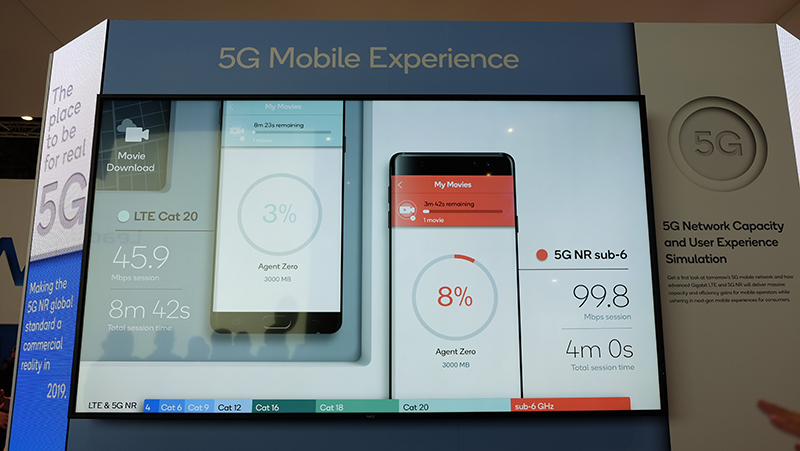 The 5G mmWave user enjoyed burst throughput of up to a whopping 1,144.8Mbps, compared to a mere 6.9Mbps for a LTE Cat 4 user. At the 10th percentile, this amounted to a 3.9Mbps burst throughput for LTE Cat 4 versus 185.4Mbps for mmWave, still a really large gap. And at the 90th percentile, 5G mmWave posted speeds up to 3,022.6Mbps, a figure that we can only dream about today. 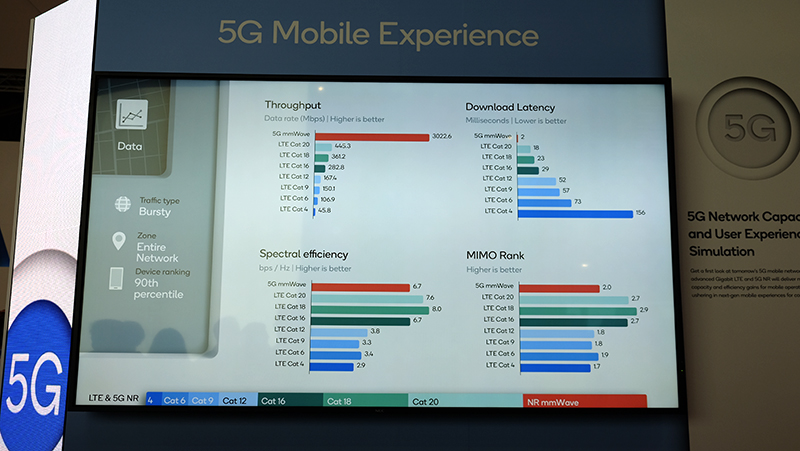 Latency was also much improved, with median browsing download latency reduced from 115ms to 4.9ms. Qualcomm says this helps close the gap between computing resources in the cloud and on your device, and resource sharing between local and remote hardware becomes far more seamless.

There are other tangible benefits as well. For example, much higher video qualities can then be supported, with median 5G users seeing 8K, 120FPS and 10-bit color video streaming. App developers will also have a much higher baseline to work with, opening the door to more immersive and engaging content.

Of course, there’s still a long way to go before we realized these speeds. Device manufacturers and cellular companies will need to build the phones and infrastructure to take advantage of the technology, but if these simulations are anything to go by, the future is looking pretty bright.

Join HWZ's Telegram channel here and catch all the latest tech news!
Our articles may contain affiliate links. If you buy through these links, we may earn a small commission.
Previous Story
Apple might offer a dual-SIM iPhone this year
Next Story
Vivo's new Apex concept phone has a half-screen in-display fingerprint scanner and a pop-up selfie camera