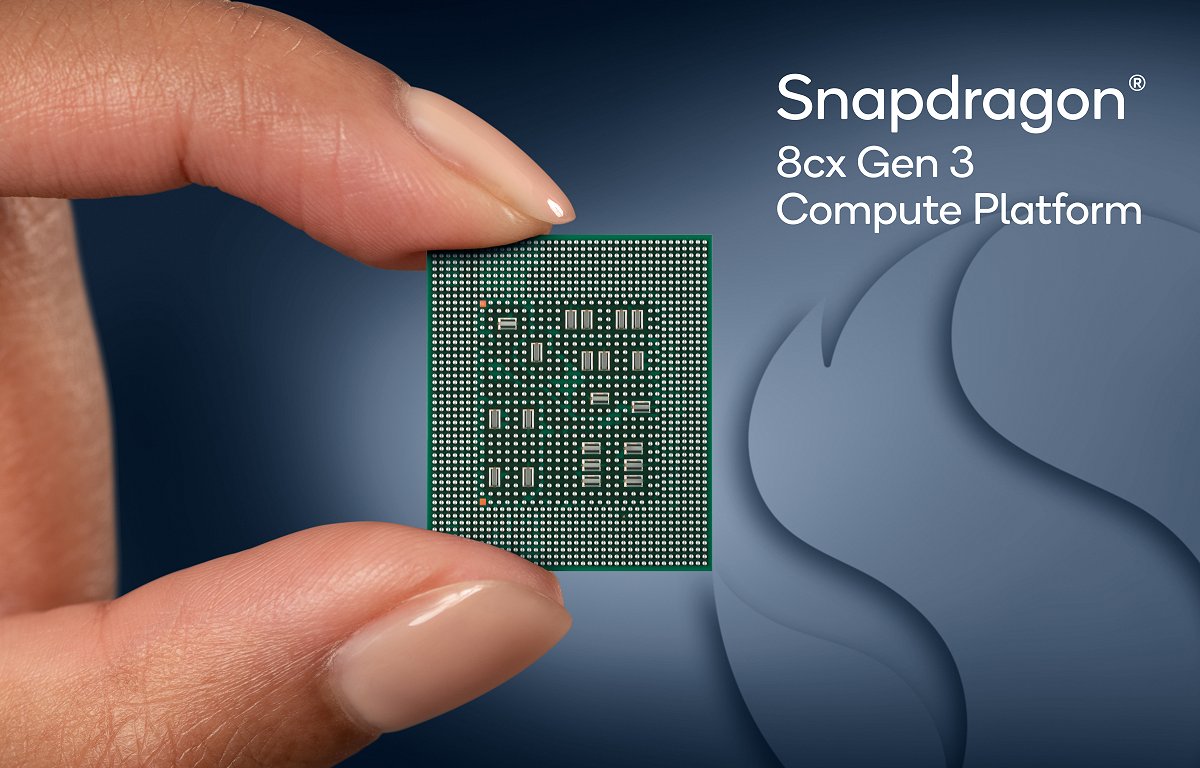 Building on Qualcomm’s launch of its flagship mobile processor for 2022 – Snapdragon 8 Gen 1 – the mobile and communications platform giant has also unveiled a massively powerful compute processor for mainstream notebooks at the Snapdragon Tech Summit 2021.

Dubbed the Snapdragon 8cx Gen 3 compute platform, this new processor is a massive leap over the previous 8cx compute platform with up to 60% faster GPU performance, 85% faster CPU performance for great multi-tasking and three times the AI processing prowess over its predecessor at 29+ trillion operations per second (TOPS). All this means the Snapdragon 8cx compute platform that we know of can only be even more capable, buttery smooth, and equipped to handle the next era of always-on, ever ready, always connected systems. 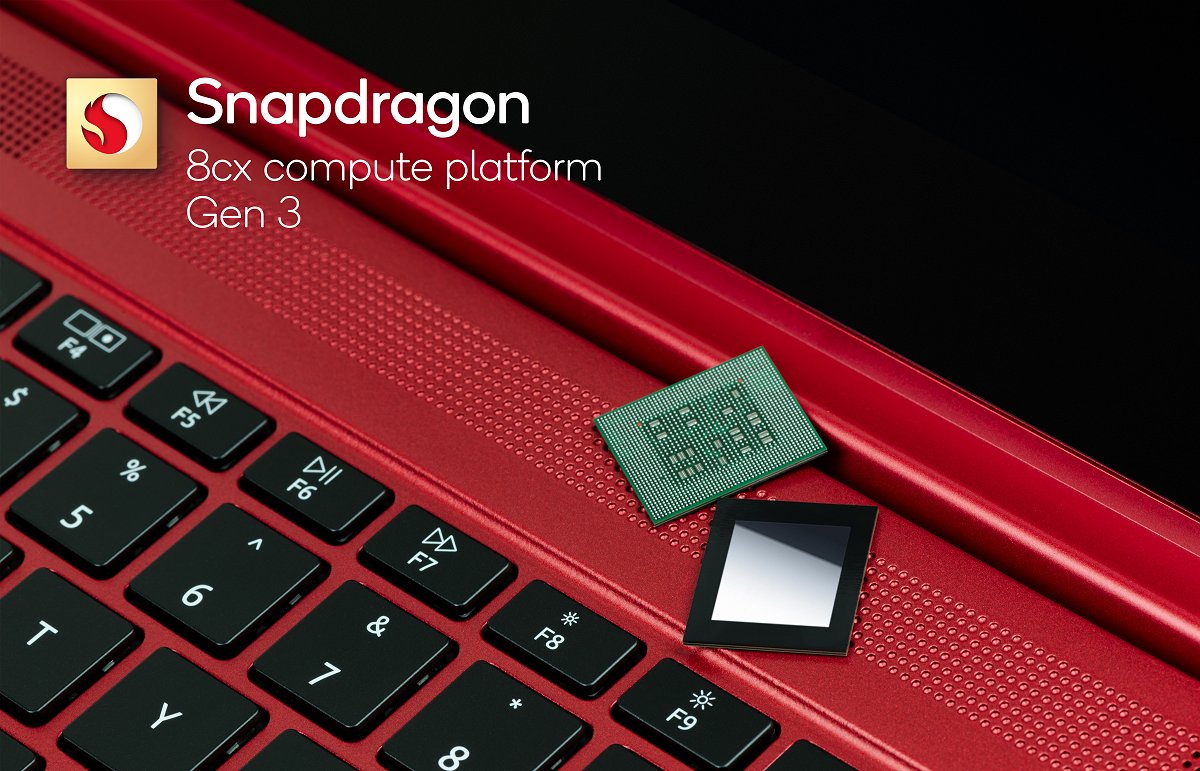 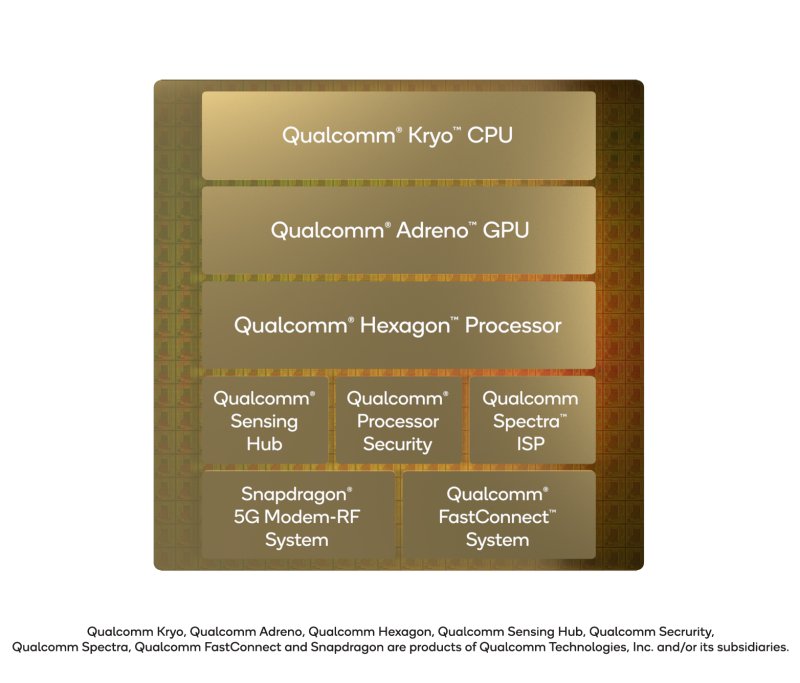 The Snapdragon 8cx Gen 3 gains this massive boost in capabilities partly because it’s manufactured on a ‘5nm’ Samsung 5nm Low-Power Early (5LPE) process technology. As such, the Snapdragon 8cx Gen 3 is the World’s first 5nm part for the Windows compute platform. Now, the ‘5nm’ naming is debatable because Samsung set out to offer 25% more density, 15% more performance and 20% less power over its 7nm 7LPP process, TSMC’s N5 for its 5nm process achieved a 1.8x transistor density ahead of its older 7nm process. Naming technicality aside, the memory subsystem has also been boosted to support speedier memory than its predecessors, so memory throughput gets a big upswing.

While HardwareZone has only covered the original Snapdragon 8cx in 2018, there was a very minor update in 2020 which resulted in a name change to Snapdragon 8cx Gen 2. However, very little separate Gen 1 versus Gen 2 apart from connectivity matters and a bump in clock speeds owing to the more matured process technology. 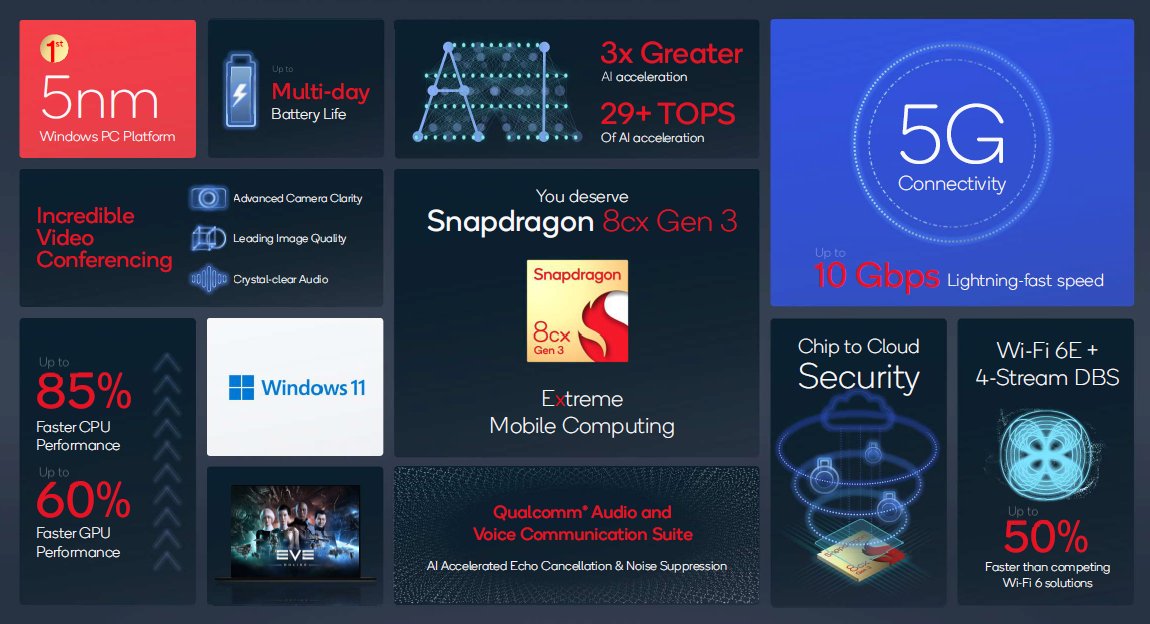 Technicalities aside, just know that Qualcomm has a noteworthy new processor that is leaps ahead of the previous Snapdragon 8cx with excellent AI acceleration and robust connectivity.

Microsoft and Qualcomm Technologies have delivered on innovative computing experiences to empower customers in our collaboration over the years, from our recently announced Windows 11 to the new Surface Pro X. -- Panos Panay, EVP, CPO, Microsoft.

I'm excited to see the launch of the Snapdragon compute platforms and can't wait to see them running in Lenovo and Motorola devices. I share Cristiano's vision of everyone and everything being connected, and Snapdragon platforms play a critical role in that connectivity -- Yuanqing Yang, Chairman and CEO, Lenovo. 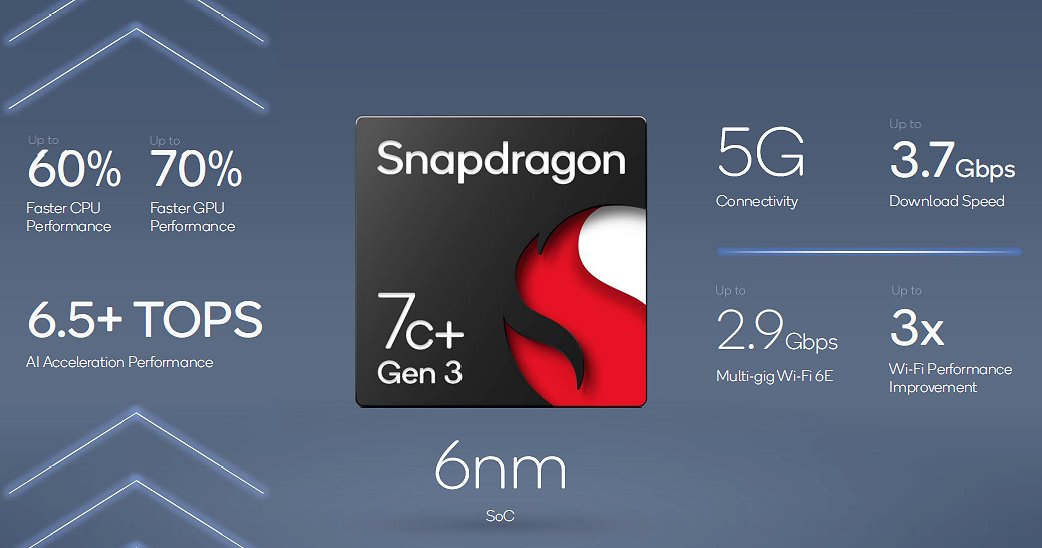 At the Tech Summit, Qualcomm also announced a new entry-level compute processor even though it just launched the Snapdragon 7c Gen 2 just six months earlier. The new Snapdragon 7c+ Gen 3 also boasts big gains such as 60% faster CPU and 70% better GPU performance thanks to its new 6nm process node among other optimisations to the new chip. Needless to say, AI performance too gets a boost from 5 TOPS on the previous model to 6.5 TOPS on the new processor. It’s also the first in this class to offer integrated 5G modem by means of a Snapdragon X53 5G Modem-RF system with sub-6GHz and mmWave support that supports download speeds up to 3.7Gpbs. Even Wi-Fi gets a big boost through Qualcomm’s FastConnect 6700 that supports Wi-Fi 6 and 6E at speeds up to 2.9Gbps.

Targeted at the Windows PC and Chromebook ecosystem, Qualcomm is committed to making connectivity ever more accessible and enabling fast, advanced, efficient, always-connected laptops for a new level of entry-tier systems with the Snapdragon 7c+ Gen 3.

Devices powered by Snapdragon 8cx Gen 3 and Snapdragon 7c+ Gen 3 are expected to launch sometime in the first half of 2022, so look out for our future reporting on this turf. 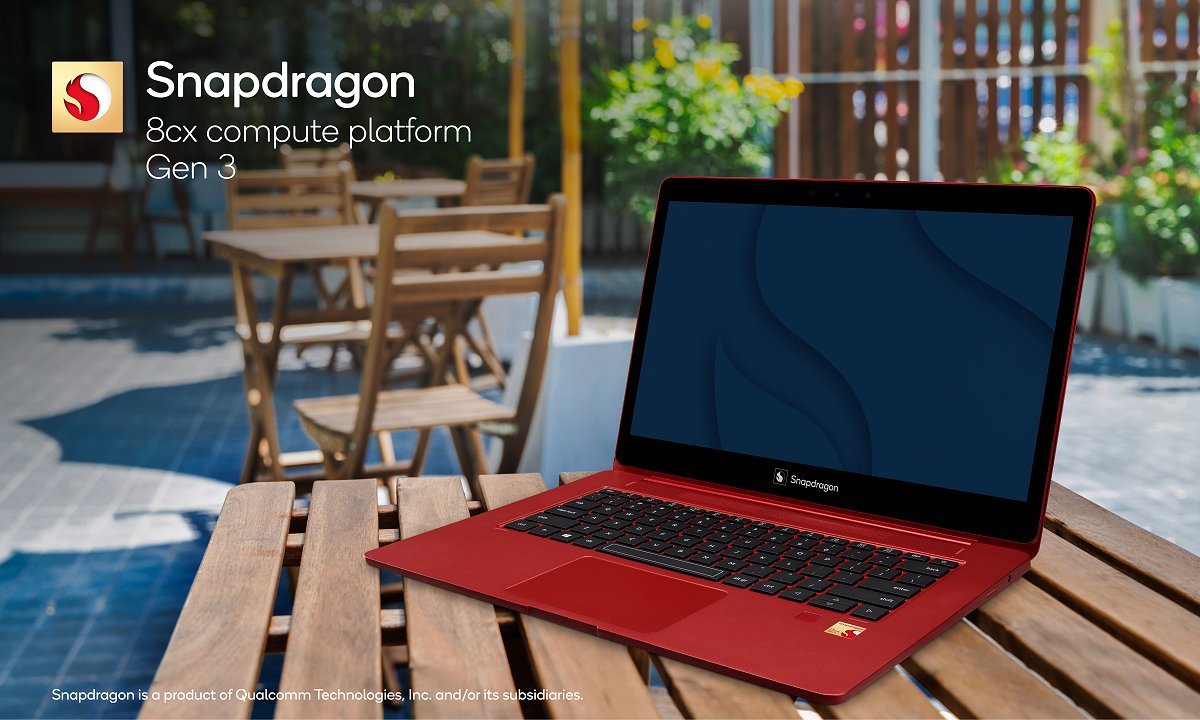 Join HWZ's Telegram channel here and catch all the latest tech news!
Our articles may contain affiliate links. If you buy through these links, we may earn a small commission.
Previous Story
Vissles' new low-profile LP 85 keyboard is like a mechanical Apple Magic keyboard with RGB
Next Story
Nothing unveils Ear(1) Black Edition, limited stocks from 8 Dec