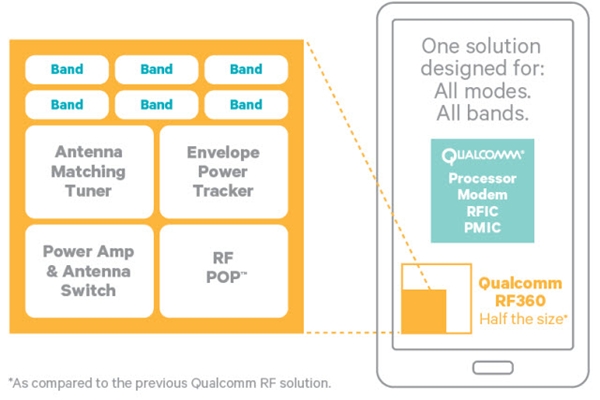 “The wide range of radio frequencies used to implement 2G, 3G and 4G LTE networks globally presents an ongoing challenge for mobile device designers. Where 2G and 3G technologies each have been implemented on four to five different RF bands globally, the inclusion of LTE brings the total number of cellular bands to approximately 40,” said Alex Katouzian, senior vice president of product management, Qualcomm Technologies, Inc. “Our new RF devices are tightly integrated and will allow us the flexibility and scalability to supply OEMs of all types, from those requiring only a region-specific LTE solution, to those needing LTE global roaming support.”

LTE band fragmentation came back due to two main reasons; the random radio spectrum availability where each country has its own set of governance and control, and the lack of global coordination of radio spectrum apportion, led to today’s conundrum where LTE is operated on more than 40 bands worldwide.

If the Qualcomm RF360 is to work as advertised, handset makers will no longer have to make multiple versions of the same handset that will work across different LTE bands in order to reach out to their global customers. Besides this unique feature, the RF360 is touted to consume less power and operate more efficiently, partly due to its new integrated RF transceiver chip, the WTR1625L, with an integrated, high-performance GPS core. For the full press release from Qualcomm, do visit this link.