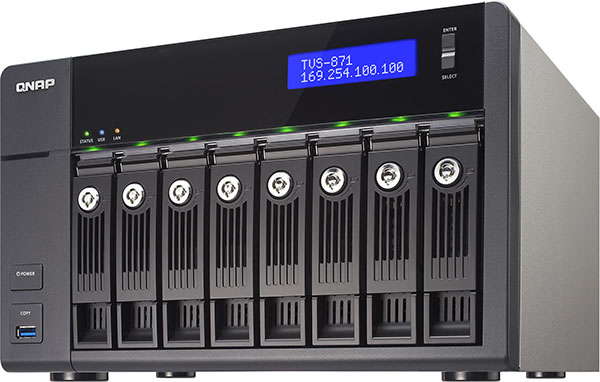 The QNAP TVS-871T is the world's first Thunderbolt 2 NAS and was designed for media professionals looking to streamline bandwidth intensive 4K workflows.

To help them do so, the QNAP TVS-871T is powerful by NAS standards. It is powered by either a quad-core Intel Core i5 or Core i7 "Haswell" processor and comes with 16GB of RAM and a 512MB of SSD cache.

It also has the ability to simultaneously and independently run Ethernet services alongside its Thunderbolt 2 network with zero bandwidth interference. It features two Thunderbolt 2 ports that can connect to two separate systems and also two 10Gbe (10Gbps) Ethernet ports.

It also has eight hot swappable disk trays that can accommodate either 2.5 or 3.5-inch drives. And if that's still not enough, storage can be added by using QNAP's new Thunderbolt 2 NAS expansion enclosures, which will allow the TVS-871T to scale up to a whopping 448TB.

Previous Story
Microsoft releases Cortana for Android as a public beta in the US
Next Story
Photos of Huawei Nexus phone leaked, reveals strange camera bump at the rear