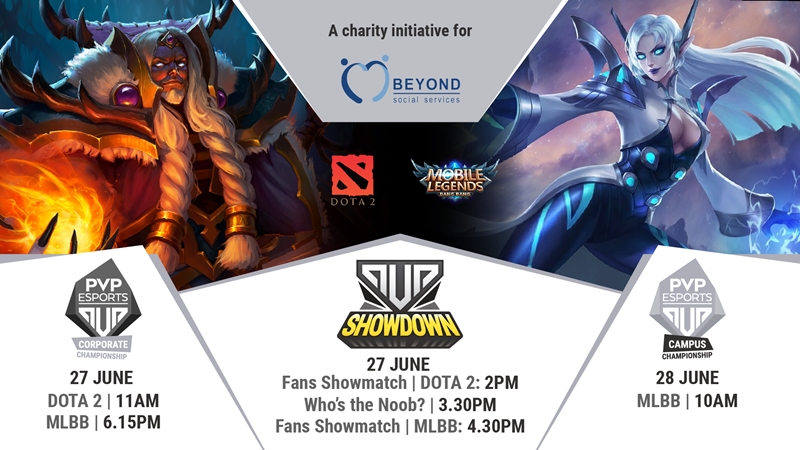 For those who have been keeping up with Singapore's esports scene during the circuit breaker, you might already know that the Singapore leg of the PVP Esports Community Championship is set to conclude over this weekend (June 27-28). The winner of the tournament will not only emerge victorious after weeks of grueling online qualifiers, but will go on to represent the country at the Regional Finals in September.

This weekend's matches, which will all be held online will feature the Corporate League on Saturday, with MeetYourMorgans 1 (JP Morgan) going up against Deloitte One (Deloitte) in Dota 2, while TurretHeist (DBS) will face off against Axomamma (ST Engineering) in Mobile Legends: Bang Bang. Following up on Sunday will be the Campus League, where 16 teams from various tertiary institutions will fight for the title of Campus Champion.

Apart from the esports aspect, PVP is also presenting a three-hour entertainment special called the PVP Showdown, where the PVP Dream Team will take on YouTube content creator NOC Plays in a fun-filled gaming trivia segment. Meanwhile, there are also special showmatches for Dota 2 and Mobile Legends where members of the community can challenge various personalities such as Dee Kosh, Team Resurgence and Sezairi, among others.

However, that is but one half of the community's involvement. While most of us have been fortunate enough to be able to treat the circuit breaker as a proper break, there are other folks out there who might not have had such a relaxing time. To help these people out, the tournament's organisers have also announced that they will be working with Beyond Social Services to raise funds for the latter's Covid-19 Family Assistance Fund, and 100% of the proceeds from their above "gaming for good" initiatives will be donated to the cause. Of course, those who would like to donate can simply do so via Giving.sg from now till 28 June.

Join HWZ's Telegram channel here and catch all the latest tech news!
Our articles may contain affiliate links. If you buy through these links, we may earn a small commission.
Previous Story
Purported render of Samsung Galaxy Fold 2 reveals punch-hole design
Next Story
Tencent is making a Pokémon MOBA for Nintendo Switch and mobile devices