Earlier this morning, members in our forum who are on Singtel fiber broadband started noticing problems connecting to the internet.

At 9 AM, Singtel officially acknowledged the issue on its Facebook page and said that its engineers are currently investigating it. It also went on to say that this issue only affects “some customers”. According to some users, the issue seems to be intermittent. For example, forum member petshopboys claims he or she could receive emails but not send them. As of this writing, it looks like the problem is islandwide, as users staying in the north, east, west, and central Singapore have reported experiencing connectivity issues. My understanding is that this issue is affecting both Singtel's home and business fiber broadband customers.

Update, 10:15 AM: According to the Straits Times, service providers running on Singtel's broadband network, such as AXS, also cannot be accessed.

Update, 10:47 AM: Some users have commented on Singtel's Facebook page that they're now able to connect to the internet. But Singtel has yet to give an all-clear.

Update, 10:55 AM: Singtel: "Internet access for residential customers is being progressively restored."

Update x 2, 10:55 AM: Singtel: "As of 10.55AM, services were fully recovered and internet access for all customers was restored. We apologise for the disruption and thank you for your patience." 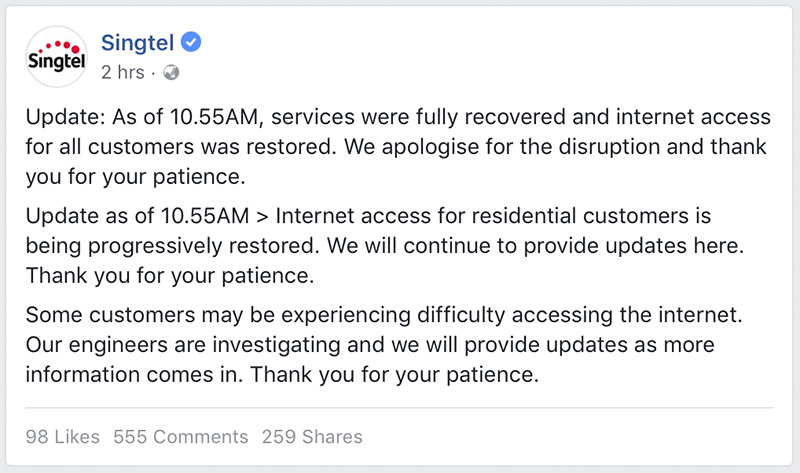