PSA: A new type of phishing attack could get you to reveal your Apple ID password

PSA: A new type of phishing attack could get you to reveal your Apple ID password 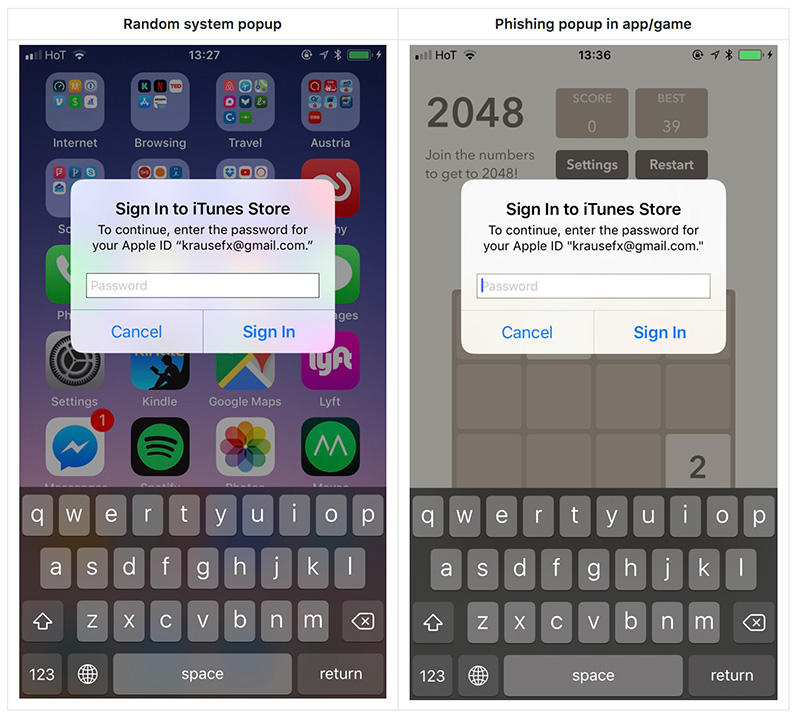 The two screenshots above look exactly the same don’t they? One’s actually a demonstration of a phishing popup proof of concept by mobile app developer Felix Krause. As detailed in his blog, iOS asks you for your iTunes password for many reasons, mostly during iOS system updates, or when apps get stuck during installation.

The popups are not only shown during the lock screen, but also inside apps like iCloud, GameCenter, or when games ask for in-app purchases for example.  As such, most of us simply fill in the necessary when prompted. However, Krause warns against doing so as any developer can simply use the UIAlertController class to create a system dialog prompting you to enter the necessary details.

Some useful tips to protect yourself

Because it uses system functions to create the dialog prompt, this particular form of attack is especially hard to detect.

As such, Krause has the following tips you can use to protect yourself.

1. Hit the home button, and see if the app quits:-

2. Don’t enter your credentials into a popup. Instead, dismiss it, and open the Settings app manually. This is the same concept as not clicking on links in emails (especially from sources you're not aware of), but instead launching the website manually in a browser app.

3. If you hit the Cancel button on a dialog box, the app still gets access to the content of the password field! Even after entering the first few characters, the app probably already has your password.

A call to app developers to take action

Krause also proposes the following changes developers could make to their apps to offer better protection:-

Here are some web links from Apple for other steps you can take to secure your devices:-

Join HWZ's Telegram channel here and catch all the latest tech news!
Our articles may contain affiliate links. If you buy through these links, we may earn a small commission.
Previous Story
Microsoft has a new iOS app that uses AI to help you learn Chinese
Next Story
Intel may be making its first ever mobile Core i9 processor