It's the rumor season now for the iPhone 6 as more details begin to surface on what to expect from Apple later this year.

According to a leaked promotional flyer in China, two Apple iPhone 6 devices - a 4.7-inch and a 5.5-inch model - will be hitting retail shelves on September 19. In addition, the 4.7-inch model is priced from 5,288 yuan (approximately S$1,056) while the 5.5-inch variant will start with a price tag of 6,288 yuan (approximately S$1,256). Both retail prices are based on currency exchange rates at press time.

The details revealed by the promotional flyer seem legit. If you recall, Apple launched the iPhone 5S/5C in Singapore on September 20 last year while the iPhone 5 made its debut on September 21, 2012. In addition, a reliable source of MacRumors claimed that Apple is likely to unveil the new iPhones in the first or second week of September with retail availability scheduled a week and a half after.

However, we caution readers to take the latest report with a pinch of salt. There are also other conflicting reports on the availability of the upcoming iPhones. KGI Securities analyst Ming-Chi Kuo suggested a week ago that the 5.5-inch iPhone 6 may be delayed until next year due to production issues while the listing on Amazon Japan pointed to stock availability of the 4.7-inch iPhone 6 towards the end of September. 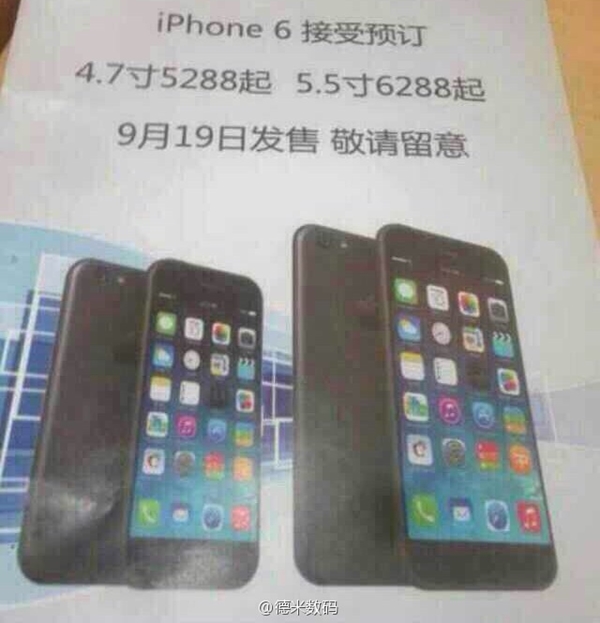 Join HWZ's Telegram channel here and catch all the latest tech news!
Our articles may contain affiliate links. If you buy through these links, we may earn a small commission.
Previous Story
Edward Snowden says Dropbox is "hostile to privacy"
Next Story
Facebook's Save feature lets you view stuff later