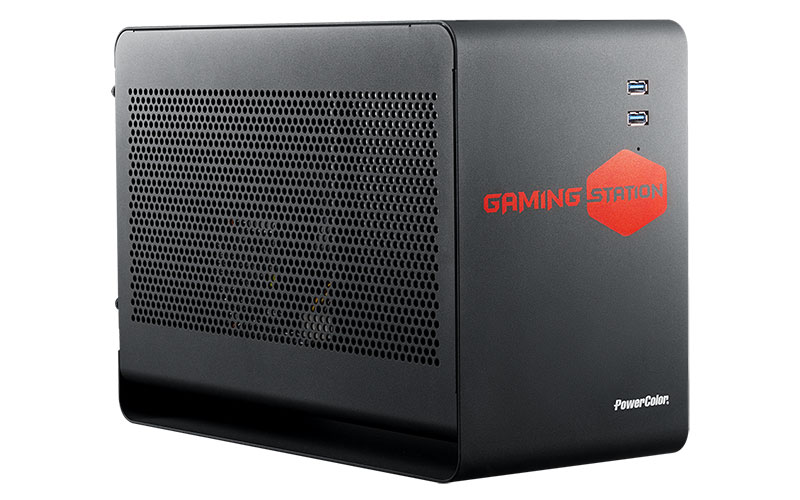 PowerColor has released a new external GPU dock called the Gaming Station. The new enclosure will replace the Devil Box that it announced last year, and features a few tweaks such as a larger 80 Plus Gold 550 watt power supply.

The Gaming Station also favors a less garish aesthetic, with a much cleaner design than the original Devil Box. It’ll fit in much better when paired with ultrabooks, although I’d still prefer to go without the bright red Gaming Station branding on the front.

The enclosure will accommodate both AMD Radeon and NVIDIA GeForce and Quadro cards, and will work with AMD’s XConnect technology as well.

There’s space for cards measuring up to 310 x 157 x 46mm, so it won’t take some of the larger custom cards that measure over 50mm thick. Nevertheless, it still has a wide range of cards covered, and is compatible with up to an NVIDIA Titan Xp.

Unfortunately, AMD graphics compatibility appears to stop at the Radeon RX 500 series cards, and the new Vega models are not listed as supported on PowerColor’s page.

This is a Thunderbolt 3 dock, so your notebook will need to have a Thunderbolt 3 port in order to take advantage of it. However, not all Thunderbolt 3 laptops will work with the Gaming Station, and the notebook also has to support external graphics in the BIOS.

You’ll find a total of five USB 3.1 (Gen 1) ports on board – two on the front and three at the back – in addition to the Thunderbolt 3 port that interfaces with the laptop. A Gigabit Ethernet board also provides you with additional ways to get connected.

The Gaming Station ships with a 50cm Thunderbolt 3 cable, which can come up a little short. That said, you may want to look into getting a longer cable in order to achieve your ideal set up.

We’ll update if there’s any further news on local price and availability.

Join HWZ's Telegram channel here and catch all the latest tech news!
Our articles may contain affiliate links. If you buy through these links, we may earn a small commission.
Previous Story
MSI’s new Optix Mag displays come with 144Hz refresh rates and curved panels
Next Story
Consumer Reports ranks the iPhone X below the Galaxy S8 and iPhone 8. Why?