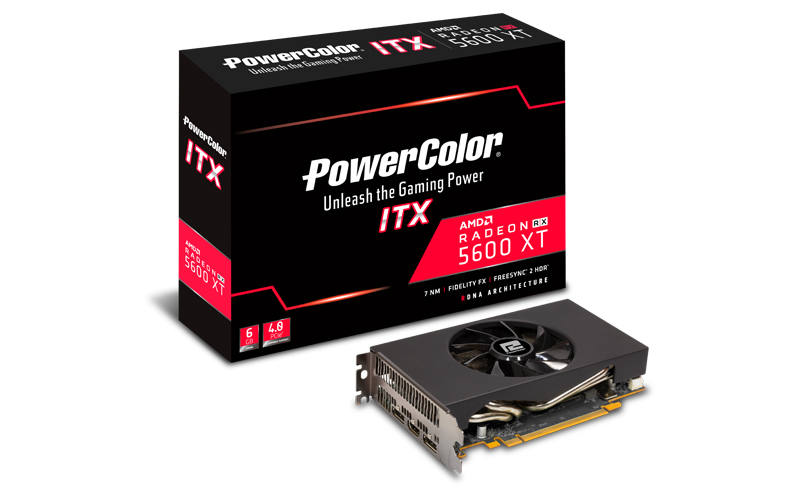 PowerColor has announced the Radeon RX 5600 XT ITX 6GB GDDR6, a compact card aimed at those looking to put together tiny, mini-ITX systems. At just 175mm in length, the card shouldn't run into any clearance issues, and it runs off a single 8-pin PCIe power connector.

The Radeon RX 5600 XT is a pretty capable 1080p card from AMD, and it's faster than the NVIDIA GeForce GTX 1660 Ti. In addition to its Navi 10 GPU core with 2,304 stream processors and 6GB of GDDR6 memory clocked at 14,000MHz, the PowerColor card also comes with a slight boost over AMD's reference clocks. It has a base clock of 1,355MHz and game clock of 1,560MHz, the latter of which refers to the speeds AMD says you're likely to see in game.

That aside, the rest of the card is pretty unremarkable, featuring a plain matte black shroud with just a single fan. It'll require two slots in your case, which is pretty par for the course today.

This is PowerColor's second mini-ITX graphics card in less than half a year, coming after the Radeon RX 5700 XT ITX, which was released as a Japan exclusive in December. That said, there still aren't many mini-ITX graphics cards around, and slapping that tag onto the card should immediately grab the attention of ITX system builders.

The card currently retails in the US at US$299, and includes AMD's Raise the Game bundle, featuring Monster Hunter World: Iceborne Master Edition, Resident Evil 3, and a 3-month Xbox Game Pass subscription for PC.

Join HWZ's Telegram channel here and catch all the latest tech news!
Our articles may contain affiliate links. If you buy through these links, we may earn a small commission.
Previous Story
Samsung’s E1.S-based PM9A3 SSD is designed with modern datacentres in mind
Next Story
Thermaltake announces new TH120 and TH240 AIO coolers with addressable RGB lighting