The Playstation VR is all ready to go

The Playstation VR is all ready to go

The Playstation VR is a very unique headset. While its rivals, Razer's OSVR, the HTC Vive and the Oculus Rift are all planned for the PC gaming crowd, the Playstation VR or PS VR caters to a very specific niche crowd; Playstation 4 owners. Even with the PS4's humongous user base of at least 30 million (as of November 22), the PS VR is a very risky gamble for Sony.

Console players have traditionally been very reluctant to adopt extraneous hardware, no matter how useful it might be. Microsoft's Kinect camera, once bundled with every Xbox One unit, is rarely even mentioned by the company now. Rarer still are the games that make use of it. Console gaming history has been dominated with such failures, like the Sega 32X add-on for the Sega Mega Drive or Nintendo 64's RAM cart.

Whether it'll be successful or not, time will tell but one thing is for sure, the headset will launch as scheduled in its Q1 2016 window. At recent gaming events, including the Playstation Experience, which took place December 5 - 6 in the US, Sony's not only been showing off the games that will be coming to the PS VR, they've been showing the final, retail hardware itself.

With months to go, and finalized retail hardware already available for trade shows, it definitely looks like no matter what the future has in store for the PS VR, at the very least, they'll be sufficient units for everybody whenever it does go on sale. It might not seem much but the inability to manufacture enough commercial units was cited as the main reason why the HTC Vive's planned Q4 2015 launch was delayed to Q1 2016. 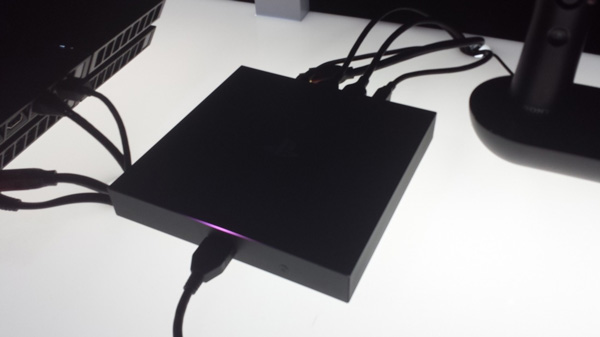 Another interesting tidbit about the Playstation VR also surfaced from the events where the PS VR was in attendance. While some may already know the news, the Playstation VR will evidently have its own processing box which handles all the VR graphical duties and other processing needs. Instead of the headset connecting directly to a PS4, it connects to the processing box, which is reported to be about the size of a Nintendo Wii. The processing box with then connect with the PS4. For those hoping to avoid clutter with wires all over the place, it looks like that might not be possible with the PS VR.

With the extra muscle being a part of the PS VR experience, it looks highly unlikely that the headset will launch at the US$299 many online are hoping for. Instead, it definitely looks like a US$399 or US$499 price is much more likely.

If you're interested in getting one, make sure to start saving for one now since the PS VR launches sometime in Q1 2016.

Join HWZ's Telegram channel here and catch all the latest tech news!
Our articles may contain affiliate links. If you buy through these links, we may earn a small commission.
Previous Story
AMD’s GPUOpen is the open source answer to NVIDIA GameWorks
Next Story
Qualcomm's new Snapdragon 820 chipset could be a Samsung exclusive at first