PlayStation Plus subscribers get Just Cause 4, Rocket Arena and more in December

PlayStation Plus subscribers get Just Cause 4, Rocket Arena and more in December 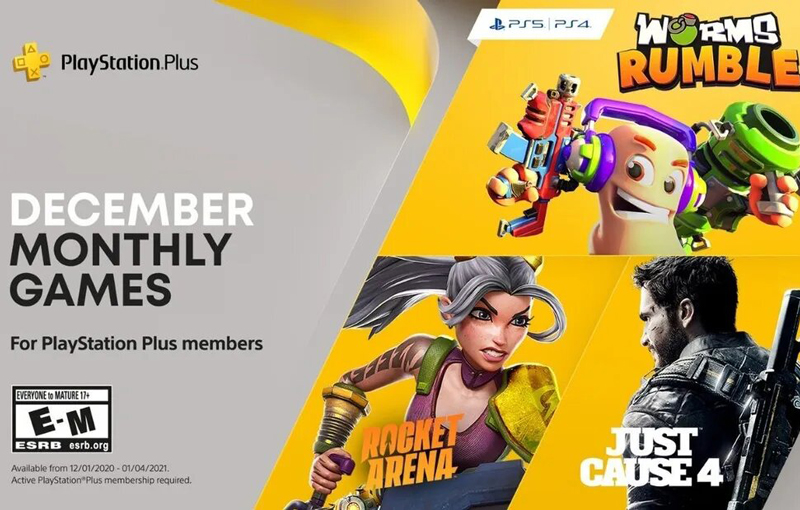 You get to blow a lot of stuff up this December!

PlaySation Plus subscribers will soon get access to three games in December: Worms Rumble, Just Cause 4 and Rocket Arena. These games can be played on both PlayStation 4 and PlayStation 5, available at no additional cost to redeem from December 1, 2020 until January 4, 2020. Let’s run ‘em down!

The multiplayer game franchise Worms is throwing away its iconic turn-based gameplay in favour of real-time, 32-player chaotic combat. Fan-favourite weapons like the Bazooka and Shotgun return as you try to blow up other worms in creative ways. You can also customise your worm and play in Deathmatch and Battle Royale game modes. Ah, Worms. The turn-based combat might be gone, but the nostalgia stays.

Rico Rodriguez returns in Just Cause 4, an action-packed open-world jaunt filled with explosions. Rico takes on the private military organisation Black Hand in this adventure, while fighting off treacherous tornadoes and lightning storms that frequently visit the country of Solis. These games aren’t known for hard-hitting stories, but they’re perfect for a relaxed afternoon of destruction.

Remember how people used to rocket-jump with the Soldier in Team Fortress 2? If that mechanic was an entire game, it would be Rocket Arena. This multiplayer 3v3 shooter lets you try out a roster of different heroes with one thing in common: explosions. Equipped with rocket launchers, in-game items and stat-boosting artefacts, you’ll have to take other players on in Rocket Arena’s various game modes.

PlayStation 4 and PlayStation 5 owners can also play multiplayer games without a PlayStation Plus subscription during the service’s free online weekend, which runs from December 19 to December 20. November's PlayStation Plus lineup of Bugsnax, Middle Earth: Shadow of War and Hollow Knight can all still be redeemed for free until December 1, 2020.

Join HWZ's Telegram channel here and catch all the latest tech news!
Our articles may contain affiliate links. If you buy through these links, we may earn a small commission.
Previous Story
Foxconn is reportedly moving some iPad and MacBook production to Vietnam
Next Story
Monster Hunter: World is getting Milla Jovovich from the Monster Hunter movie