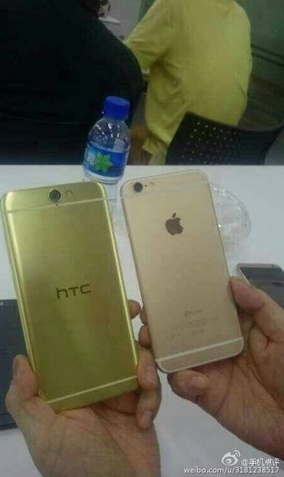 Are there two HTC phones to be released later this year - the 6-inch HTC O2 and the 5.5-inch HTC Aero? Or are they the same phone? Nonetheless, you are looking at the first alleged photos of the HTC Aero which are leaked on Chinese networking site Weibo.

Coincidentally, the HTC Aero is photographed alongside an Apple iPhone 6 and the similarities between the two devices are apparent. If you remove the HTC logo and ignore the different position of the rear camera, we would have mistaken it for an iPhone 6 Plus. As the photo could be photoshopped, we suggest that you take this with a pinch of salt.

The HTC Aero is rumored to come with a 5.5-inch display with 2.5D curved glass, a MediaTek Helio X20 processor, 4GB RAM and a "groundbreaking" new camera.

Join HWZ's Telegram channel here and catch all the latest tech news!
Our articles may contain affiliate links. If you buy through these links, we may earn a small commission.
Previous Story
Sony teases "a smartphone with greater focus" for 2 September event at IFA 2015
Next Story
Twitter culls websites made for saving deleted tweets of politicians