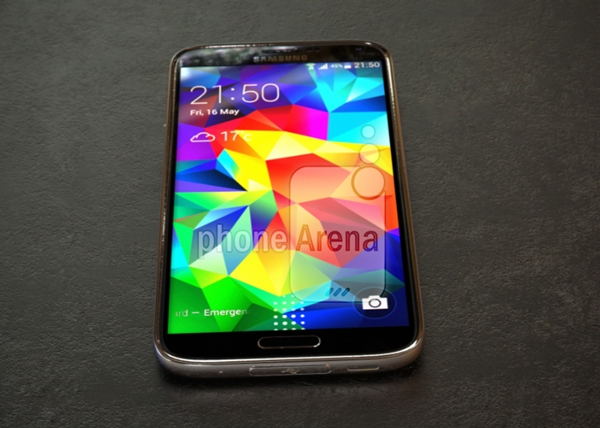 The latest leaks of photos and videos suggest that the Samsung Galaxy S5 Prime is more than just a mere rumor; it is an actual device that is going to be launched soon.

According to three photos sent in by a reader of PhoneArena, the Galaxy S5 Prime sports an aluminum finish and speakers at the bottom. This upcoming phone model clearly has a different design philosophy from the current Galaxy S5 where we see the same old plastic design with speakers at the back.

Aside from the photos, there are two other videos of the device posted by TK Tech News on YouTube. While the device shown in the two videos has a different back material and finish, the narrator emphasizes that it is a pre-production model. This means that the final product design might differ from these leaks.

Various benchmarks show that the device has a model number SM-G906A and runs on Android 4.4.3 KitKat. The Settings menu within the device also reveals the device name to be Galaxy S5P, where we can safely assume the "P" to stand for Prime.

The Korea Herald reported earlier this month that Samsung is planning to unveil the Galaxy S5 Prime in June to compete with LG's upcoming G3 smartphone. Alleged specs of the device include a 5.2-inch QHD (2,560 x 1,440 pixels) display, a Qualcomm Snapdragon 805 quad-core processor and 3GB RAM.

Another higher end Galaxy S5 model was spotted on a pricing database in Hong Kong a week ago. It has a model number SM-G906S and is given the name, Galaxy S5 LTE-A. Based on the specs listed on the database, this particular device has a smaller 5.1-inch QHD display.

Could the two model numbers be referring to the same device or is Samsung planning to launch two variants of the Galaxy S5 for different markets? Only time will tell.