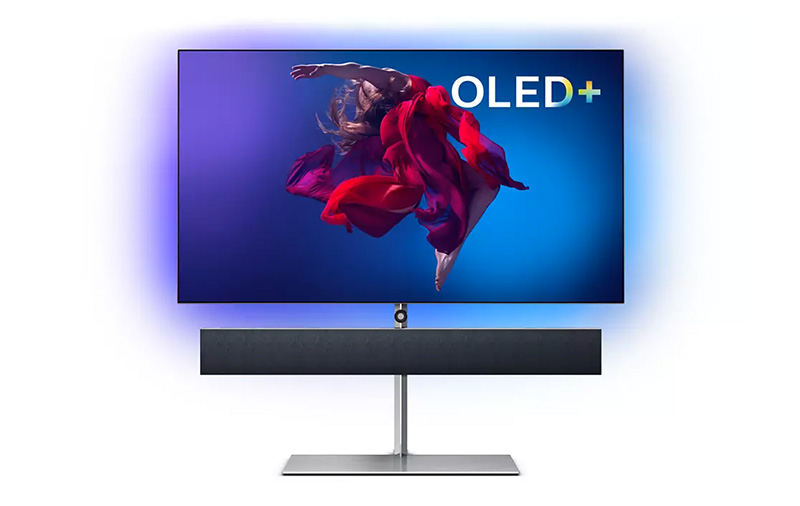 Offered only in a 65-inch screen size, the OLED+ 984 is a collaboration between Philips and British audio specialists Bowers & Wilkins. The partnership has yielded three OLED TVs since 2018, and this OLED+ 984 4K TV is the newest (and most premium) of them all.

For a start, the OLED+ 984 uses Philips’ 3rd generation P5 picture processing engine. It goes without saying that the new processor is faster than its predecessor and this enables, according to Philips, the OLED TV to bring about “breathtaking detail and quality realism”.

The OLED+ 984 features Philips’ four-sided Ambilight technology. In a nutshell, LEDs located along the four edges of the TV will intelligently light up and cast on-screen colours onto the wall in real time to create a more immersive viewing experience.

In terms of format support, the OLED+ 984 will play nice with HDR10+ and Dolby Vision content, making it one of the few TVs in the market today to support the two competing dynamic metadata HDR formats. In theory, if your sources use these formats, you’ll get a better HDR picture because the TV is able to make use of the extra data to perform brightness adjustments on a frame-by-frame basis.

Software-wise, the OLED+ 984 runs Android TV so you’ve access to the Google Play Store. There’s support for Google Assistant, too, which means you can command the TV and compatible smart home devices with your voice. Voice control using Alexa is possible as well if you’ve an Alexa-enabled device such as an Amazon Echo speaker.

The 3.0 sound system on the OLED+ 984 is where B&W comes in. Mounted in a separate cabinet below the TV (a soundbar, basically), it features an “integrated sub-woofer, tweeters and full-range drivers” design, with up-firing speakers (yes, Dolby Atmos is supported), separate central tweeter for clearer dialogues and tweeters positioned on top of the enclosure for better high frequency performance. The soundbar is even covered in a premium fabric sourced from Kvadrat.

The 65-inch Philips OLED+ 984 is now available in Singapore for S$6,999. Best Denki is where you should head to if you want to have an eyes-on.