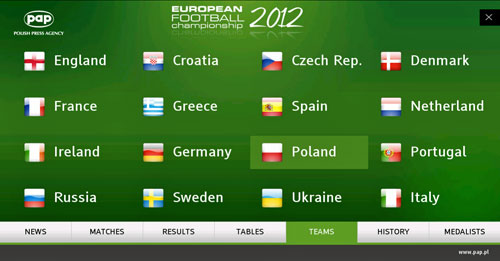 Philips' Smart TV platform, better known as Net TV, has been fairly quiet since its arrival last year. However, Philips' latest update is not only timely, but it should appeal to all football fans tracking the Euro 2012 championships as the group stages rage on in Poland and Ukraine. More precisely, a new Euro 2012-themed app for the football tournament is now available on Philips' Smart TV displays. The announcement was made by TP Vision last Friday, a company tasked with the development and marketing of Philips-branded sets. TPV Technology commands 70 percent of TP Vision's stakes.

In a nutshell, the app will cover all the latest Euro 2012 thrills and spills, including news, statistics, fixtures, and match results, all beamed directly to a Philips Smart TV. Here's a snippet from TP Vision's official press release.

"The free Euro app, available now, provides the latest Euro news including tables, fixtures & results as well as interesting Euro-related tidbits such as the stadiums, history of the championship, info about the teams and stars playing. The latest information will be provided by the Polish Press Agency providing a comprehensive details of all of the latest football goings on, direct to the TV. The app will run in parallel to a Euro Football quiz app to test your knowledge about the championship as well as teams and players involved. The multiple choice questions are asked based on photos, teams, strips, coaches and stars."

Interestingly, the Philips' Euro 2012 app will also be 'converted' to a London Olympics Games app once the European football tournament is over. Similar to the Euro 2012 app, the Olympics application will feature various informative bits like medal tables, schedules, results, and tourists info on Olympic venues. A history of the games will be available as well. It is unclear if the Euro 2012 app is accessible to Philips' customers here in Asia, but maybe you can let us know if you happen to score a winner on your Philips Smart TV. Man on!

Source: TP Vision via What Hi-Fi? Sound and Vision