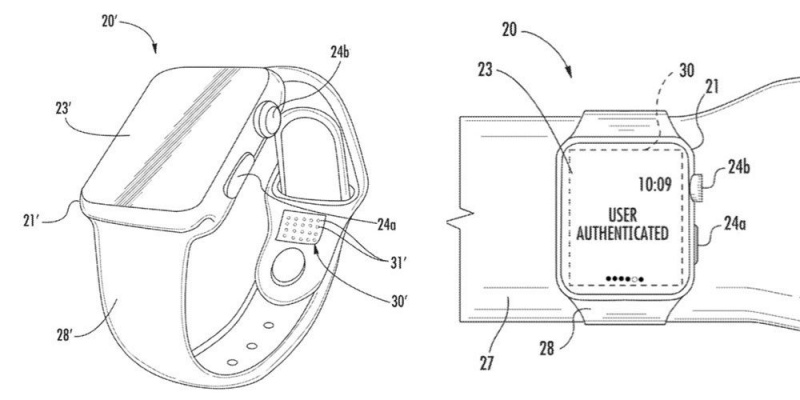 The first patent describes a built-in biometric sensor on the Apple Watch band which can recognize the user by the texture patterns of the wrist. A thermal sensor could also be used to detect patterns in the skin and in wrist hair, and unlock the Apple Watch as soon as the user puts it on.

The second patent describes the possibility of including visual indicators on the band to show the type of activity being tracked, and the current progress towards the daily goal. Apple seems to believe this is a more discreet way of conveying information to the user.

The third patent describes a way for a motorized watch band to automatically adjust its fit. This will come in handy during workouts or to get more reliable heart rate readings.

BGR reported in May 2017 that Apple is planning to introduce interchangeable "smart watch bands" which have several features such as a built-in camera and a secondary battery pack. In October 2017, Apple also filed a patent application for a "Wrist Worn Accelerometer for Pulse Transmit Time (PTT) Measurements of Blood Pressure". According to Apple's design, blood pressure can be calculated with the Apple Watch and a sensor-equipped band.

Join HWZ's Telegram channel here and catch all the latest tech news!
Our articles may contain affiliate links. If you buy through these links, we may earn a small commission.
Previous Story
These Aorus liquid coolers come with customisable LCD displays
Next Story
Huawei Mate X likely to launch with no access to Google apps or services