Out of storage? Apple now has a 2TB iCloud storage plan

Out of storage? Apple now has a 2TB iCloud storage plan 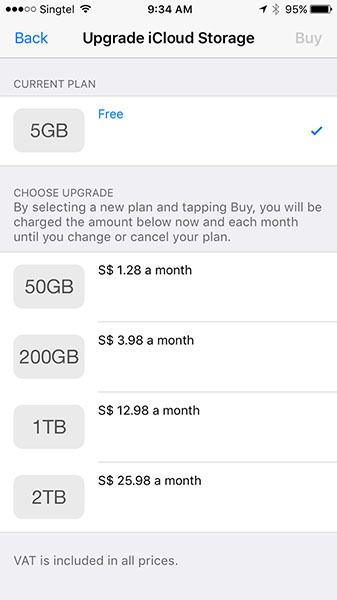 Apple users, are you running low on storage?

Lucky for you, Apple has just dropped a new 2TB iCloud storage plan. The new 2TB plan will cost users S$25.98 per month.

What's also interesting to note is that some reports suggest that this could be proof that Apple will release a new 256GB iPhone.

The last top tier plan, 1TB, was about 8 times the maximum capacity of the iPhone - 128GB.

Join HWZ's Telegram channel here and catch all the latest tech news!
Our articles may contain affiliate links. If you buy through these links, we may earn a small commission.
Previous Story
ASUS' new PCE-AC88 Wi-Fi PCIe adapter will give your desktop a massive Wi-Fi boost
Next Story
Expect to see the new MacBook Air with USB Type-C port in October