Note: This article was first published on 4 August 2020. 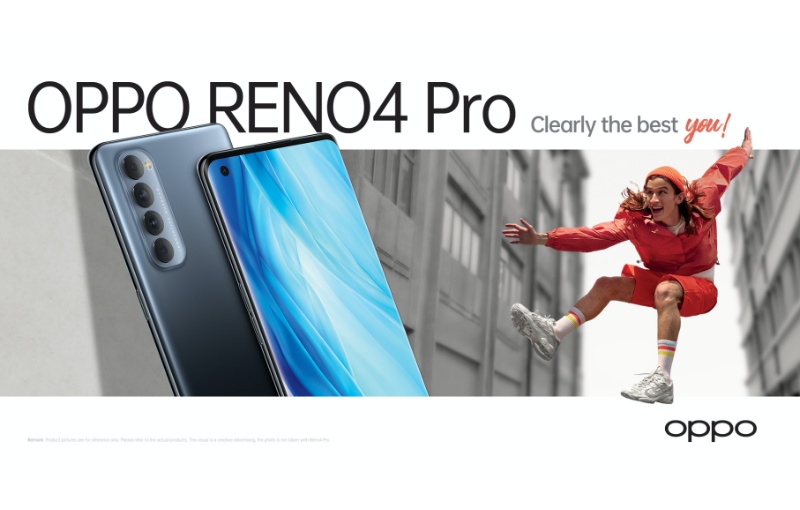 In an online event today, Oppo announced the latest edition to its Reno family, the Reno4 Pro and two new wearables ( the Oppo Watch and Enco W51 TWS headphones) as it looks to expand its IoT network of devices. This comes less than a year after the Reno 3 and Reno 3 Pro were launched and made available here on sale.

The Reno4 Pro is powered by a Snapdragon 720G chipset with 8GB of RAM and 256GB of storage. It also has a 4,000mAh battery with Oppo's 65W SuperVOOC 2.0 fast charging support. Oppo claims some brisk charging times of 0-100% in under 40 minutes. Oppo boasts of TÜV Rheinland Safe Fast-Charge System Certification here for some peace of mind in case you have battery concerns and that fast-charging is getting out of hand these days.

The phone features a 6.5-inch E3 Super AMOLED display sporting a FHD+ resolution at 2,400 x 1,080 pixels. In line with recent trends, the Reno4 Pro's display also has a 3D curve design all the way to the edges, as well as support for a faster 90Hz refresh rate.

For user creature comforts, the Reno4 Pro has an in-display fingerprint sensor, a headphone jack, and a microSD card slot. Dual SIM slots are also present while the OS is Oppo’s ColorOS 7.2 running on top of Android 10. 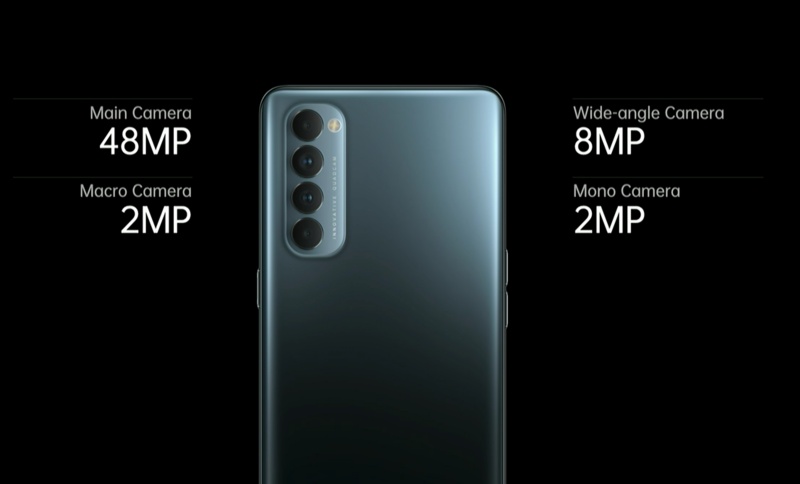 The rear camera setup includes a 48-megapixel main sensor, an 8-megapixel ultra-wide, a 2-megapixel macro, and a 2-megapixel monochrome sensor. One key camera feature highlighted was an “AI Colour Portrait Photo and Video” modes that highlights people in individual colours with the background remaining in black and white, ala Sin City so you can feel like a real movie director. The front selfie camera is serviced by a single 32-megapixel shooter.

According to Dylan Yu, Marketing Director, Oppo Singapore, the Reno brand stands for “creativity and expression”. Oppo and the Reno4 Pro making are making a commitment to Singapore music and enabling local Singapore creatives. For example they are partnering with local singer JJ Neo who shot her latest music video exclusively on the Reno4 Pro. Yu also announced plans to stream more online content with local artistes in September.

We asked Oppo why their launch this time round was without a non-pro model but have yet to receive a reply. We will update this if they do respond. 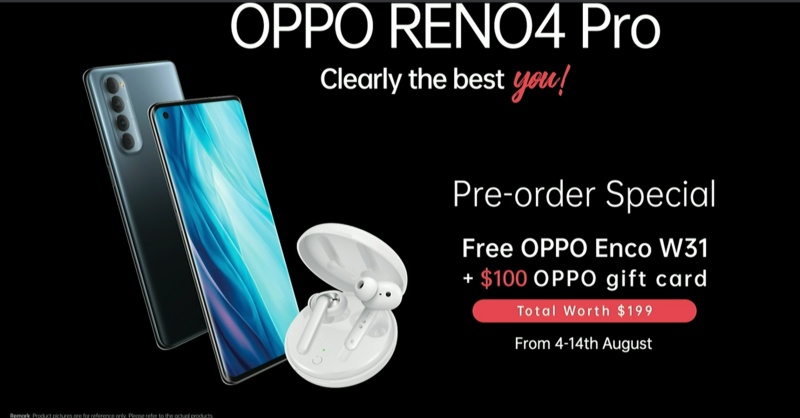 The Reno4 Pro comes in Starry Night and Silky White, and is priced at S$899. The phone will be available for pre-order from Tuesday, 4 August 2020, till Friday, 14 August 2020, at Oppo’s Shopee Flagship Stores (online exclusive) as well as at all Oppo Concept Stores.

Customers who pre-order the Reno4 Pro will receive a pair of Oppo Enco Free W31 Headphones worth S$99 and a $100 Oppo gift card valid for use for any Oppo product from 15th to 31st August. Customers can trade-in their Oppo products during the pre-order period to offset their purchase price along with pre-order gifts, terms and conditions apply so visit the Oppo Concept store to find out more. From 15th August 2020 the phone will be sold at Singtel, Starhub and M1 stores, Oppo Concept Stores as well as Oppo’s Shopee and Lazada Flagship Stores.

No longer teasing the Oppo Watch Five months after announcing the Oppo Watch, the Chinese company is ready to bring it into our shores.

The Oppo Watch will come in two variants with both powered by Google's Wear OS. The 46mm version and 41mm version will each have two to three colours and interchangeable straps. However, while we reported earlier that the larger version was available in both LTE and Wi-Fi versions, the watches sold here will be Wi-Fi only.

A full charge of the Oppo Watch can be achieved in just 75 minutes through the all-new Watch VOOC Flash Charging. The Oppo Watch 46mm has a battery life of up to 36 hours when in smart mode and can even be extended to 21 days in Power Saver mode. Oppo’s Dual-Chip Endurance System switches between a Snapdragon chip-driven Smart mode and an Apollo chip-driven Power Saver mode, to balance performance and energy efficiency throughout the day.

The always-on heart-rate monitoring will ensure consistent tracking and monitoring, even when resting. While the Sleep Tracking function delivers a detailed report documenting sleep states each night for the health conscious.

The Oppo Watch will be priced at S$399 (46mm) and S$299 (41mm) respectively and be available in Singapore from 15 August 2020 at Oppo Concept Stores and Oppo’s Shopee and Lazada Flagship Stores. If the LTE version goes on sale, we will update this accordingly.

Bringing music to your ears 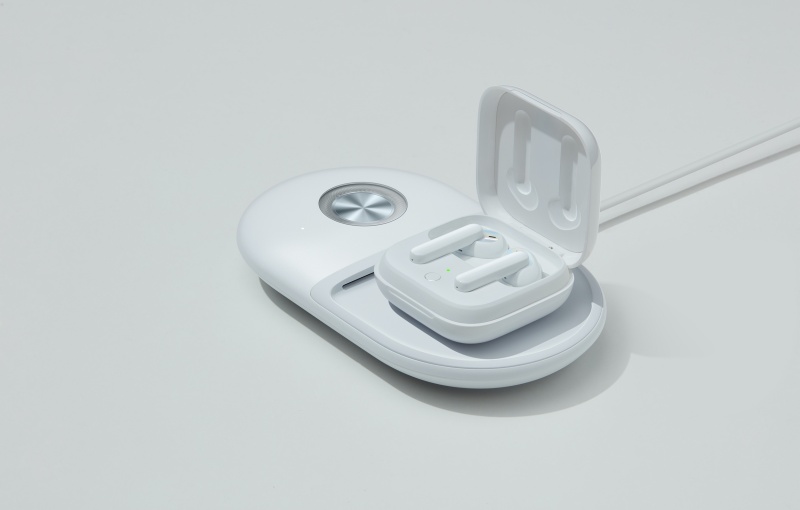 The Enco W51 supports Qi wireless charging with a 15- minute charge for up to 3 hours of listening time. With its case, the Enco W51 has a total battery life of up to 24 hours.

The Oppo Enco W51 is priced at S$179, will be available from early September on Oppo’s Shopee and Lazada Flagship Store and at all Oppo Concept Stores.

Jumping on the bandwagon 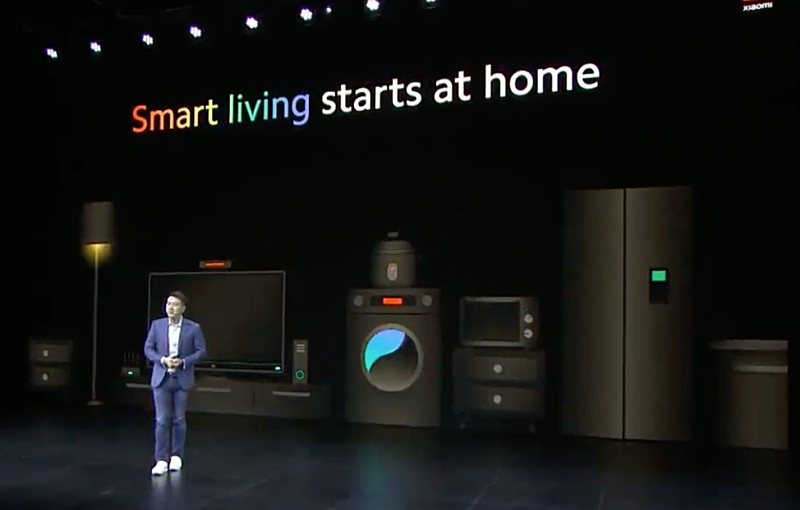 Oppo isn’t the only smartphone vendor to branch out into wearables and the IoT arena.

Apple held their WWDC a while ago with updates announced to iOS, Mac OS, Watch OS, and a new processor for MacBook Pros. Xiaomi also revealed smartphones and devices that expanded their IoT ecosystem with an online event. Even Google launched their Pixel 4a yesterday as well as announcing their new smartphones coming later this year.

According to Oppo, the launch of the new IoT products is part of their commitment to smart devices and services to consumers with intelligent connectivity. This covers 5G development, and the next generation 125W flash charge technology.

Join HWZ's Telegram channel here and catch all the latest tech news!
Our articles may contain affiliate links. If you buy through these links, we may earn a small commission.
Previous Story
Toshiba officially exits the laptop business
Next Story
The Huawei Mate 40 could be the last phone to be powered by Kirin chipsets