OpenSignal: Singapore has the fastest LTE speed; Singtel and StarHub the two fastest LTE operators in the world

OpenSignal: Singapore has the fastest LTE speed; Singtel and StarHub the two fastest LTE operators in the world

Note: This article was first published on 4th February 2016. 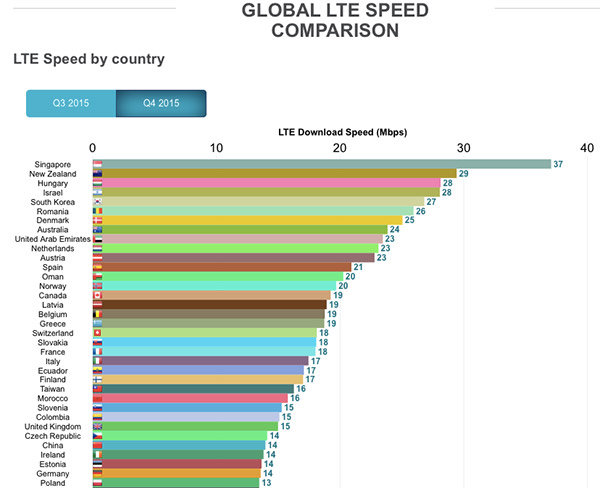 Wireless coverage mapping company OpenSignal has released its latest State of LTE report, and in it, the London-headquartered company has ranked Singapore as the fastest country with LTE, with a download speed of 37Mbps.

This is possible as Singapore had the fastest networks, with local telcos Singtel and StarHub being ranked the two fastest LTE operators in the world during the sampled period, which was between October and December last year. Singtel managed to hit a speed of 40Mbps; StarHub 39Mbps. Canada’s SaskTel was also very fast during this timeframe, managing 35Mbps.

The country with best LTE ‘time coverage’ is South Korea, with 97%. Singapore is placed 6th with 83%, after Japan, Hong Kong, Kuwait, and the Netherlands.

At the telco level, LGT (or rather, LG U+) of South Korea earns the title of network with best time coverage (99.6%); this basically means its LTE users were able to get an LTE signal 99.6% of the time.

Comparatively, Singtel has a coverage rating of 86%, and StarHub 79%. KT Corp’s Olleh (from South Korea) is a standout, because it managed a very fast 34Mbps connection speed and a very high 96% coverage. In other words, not only was Olleh's LTE speed during Q4 2015 not far off from Singtel and StarHub's, its users were able to get an LTE signal more often than Singtel and StarHub’s customers.

For those wondering, M1 managed 29Mbps (placed 11th globally) and a coverage rating of 82% (placed 23rd globally). Interestingly, this also means while M1's speed wasn't as good as StarHub's, M1's customers were able to get an LTE signal more reliably.

Finally, for some context, the global average for LTE download speed is 13.5Mbps.

More than 357,000 users contributed to the data using OpenSignal’s apps; for more details on OpenSignal’s methodology and how other countries and operators fared, follow the source link below to check out the full report.

Join HWZ's Telegram channel here and catch all the latest tech news!
Our articles may contain affiliate links. If you buy through these links, we may earn a small commission.
Previous Story
Your third-party USB Type-C cable may destroy your laptop if you aren't careful
Next Story
Samsung Galaxy Note 7 to have a bigger display and more RAM?