Speedtest (by Ookla) just published a new report today that showed the fastest ISP and telco in Singapore. The data was collected from users who conduct speed performance tests with Speedtest’s widgets and apps, within the Q4 2016 to Q1 2017 period (October 2016 to March 2017).

And the fastest ISP in Singapore is… 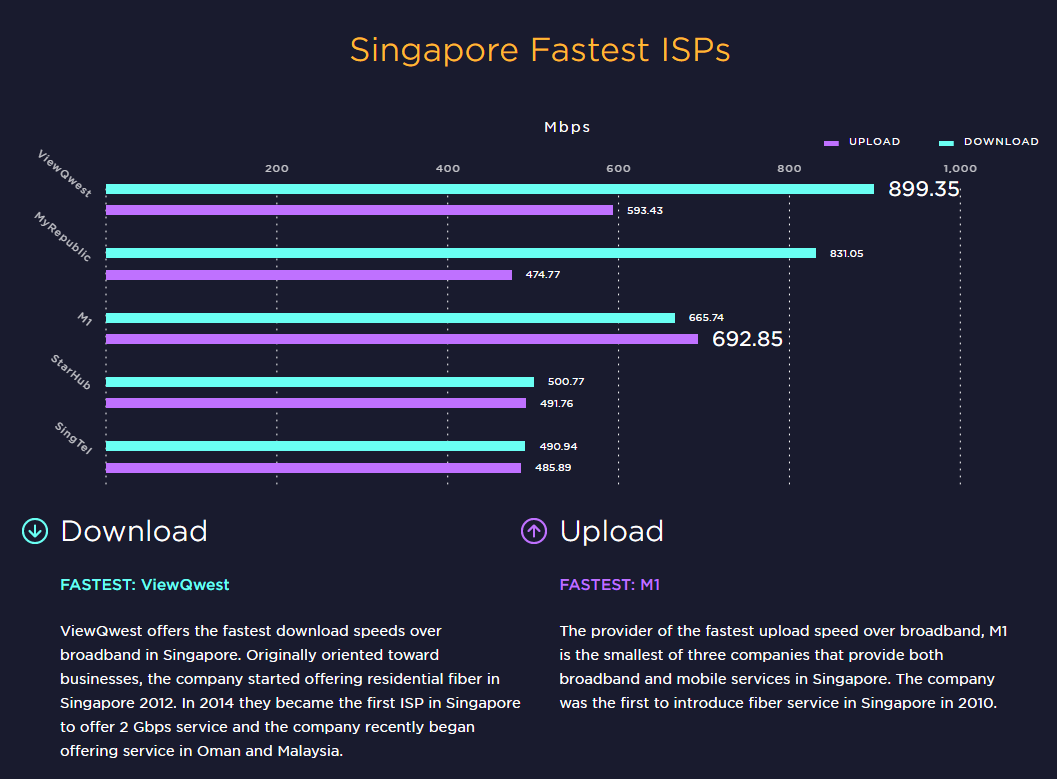 The market report showed ViewQwest being the fastest ISP in Singapore within the Q4 2016 to Q1 2017 period. Speedtest determined this by looking at the top 10% download and upload speeds of each ISP. The speed scores are submitted by the consumers themselves.

The Singapore Fastest ISPs graph (above) represents ISP customers that subscribe to the faster connection tiers that are accessible to users, giving us an insight on how it’s like to have top-end fixed broadband performance. The Singapore Fixed Broadband Speeds graph (below) is an average across all submitted results in Singapore, which shows us what the average user would experience here, no matter their broadband allegiance, or if their router is as powerful as a potato. 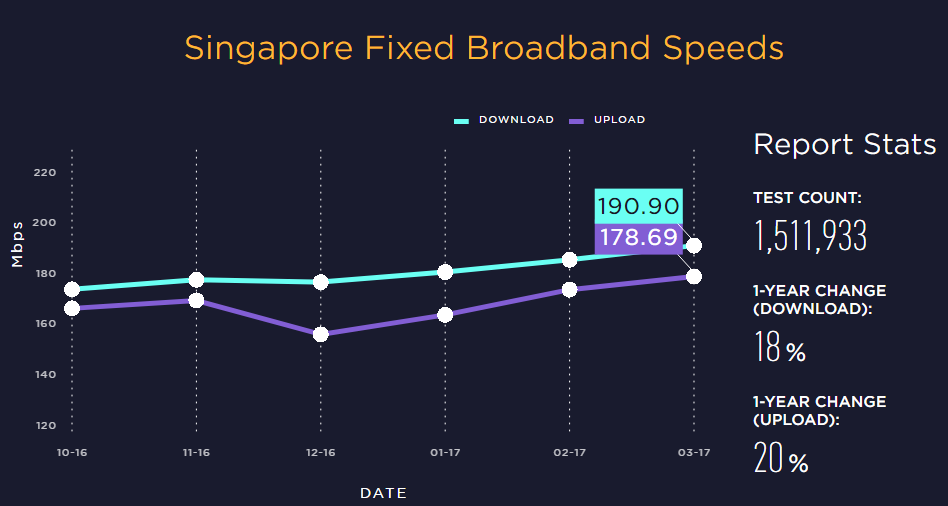 And the fastest telco in Singapore is… 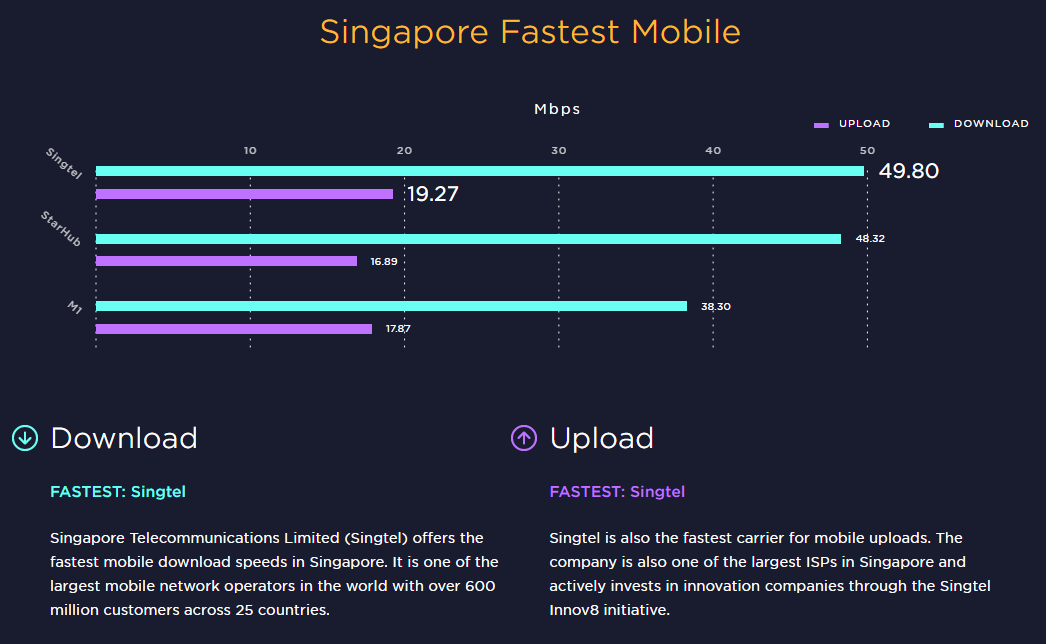 With this, Singtel is the fastest telco in Singapore for mobile data for both download and upload speeds, within Q4 2016 to Q1 2017. Download speeds are up to 49.80Mbps, while upload speeds were 19.27Mbps at peak. The fastest telco was determined by “modern devices” – Speedtest took the results from phones that could access 4G LTE networks. This also means that the numbers shown are representative a typical phone user with a 4G-capable phone or tablet. 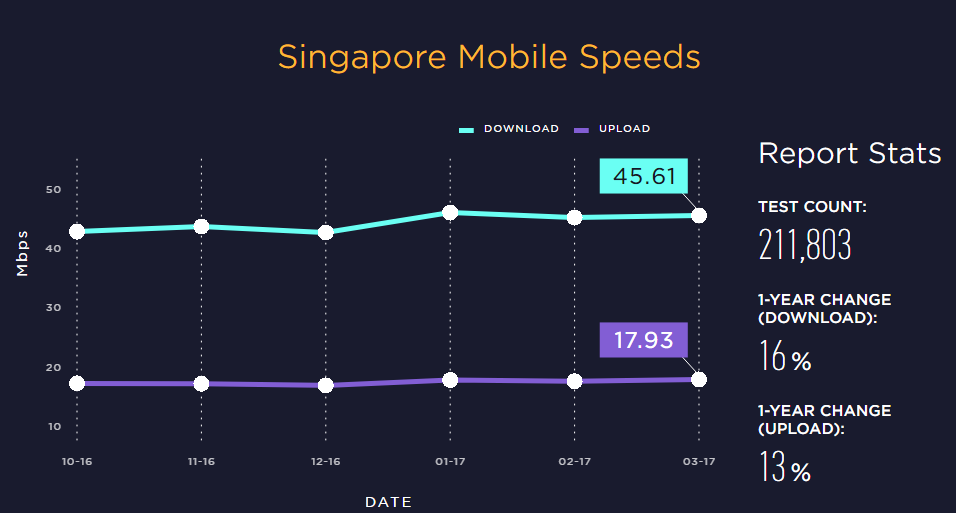 The average mobile download speed in Singapore is at 44.37Mbps from Q4 2016 to Q1 2017, putting Singapore mobile networks as the second fastest in the world (fastest mobile download goes to Norway). This is also a 16.4% improvement over the previous Q4 2015 to Q1 2016 period. Our average mobile upload speed is the fastest in the world at 17.46Mbps.

In Speedtest’s report, it said that “mobile customers can’t make a bad choice in Singapore” – a sentiment that would be proven otherwise by users on our forums and each respective telco’s Facebook page. Nonetheless, it seems true that our networks are quite sufficient – on average.

You can view the Speedtest Market report here.

Last year, we picked up a separate report that showed Singapore having the fastest LTE speed in the whole world. You can see it here.

Join HWZ's Telegram channel here and catch all the latest tech news!
Our articles may contain affiliate links. If you buy through these links, we may earn a small commission.
Previous Story
The ASUS ZenBook 3 Deluxe ups the ante with a 14-inch display and more ports (Updated)
Next Story
Apple is developing a chipset to power AI on its devices