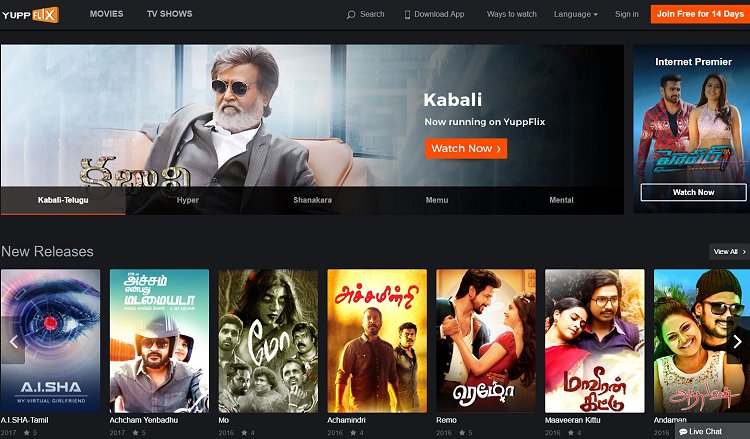 This article is contributed by Anjali Raguraman.

Its current content library offers more than 250 South Asian TV channels and 5,000 movies, with a reach of more than 400 million households worldwide, including territories such as the United States, the United Kingdom, Canada, Australia, New Zealand and the Caribbean.

The YuppTV app, available for download on the Apple App Store and Google Play Store, can also be viewed on up to 27 devices including smartphones, tablets, computers and even the XBox 360 or PlayStation.

Last month, the Atlanta, Georgia- based company received a US$50- million (S$69.5-million) investment injection from Emerald Media - a pan-Asian platform, focusing on the media and entertainment sector, that was established by US-based investment firm KKR.

Speaking to The Straits Times from Atlanta, YuppTV founder and chief executive officer Uday Reddy says the company, which has been around since 2006, will use these funds to boost original content production.

But instead of creating content for the already saturated Hindi market, it will focus on the regional languages of South India, in particular, Tamil, Telugu and Malayalam.

"We want to focus on regional languages first because there's already a lot of content available on the Hindi side; we wouldn't want to duplicate that work," he explains.

The shows will be rolled out over the next few months "and will continue as a long-term strategy", he adds.

The service also plans to get big- name movie stars on board, but Mr Reddy declines to go into specifics on whom they have secured.

"We're going to announce very soon," he says, adding that they have already secured Telugu superstar Mahesh Babu as a brand ambassador.

The backing of Emerald Media is also significant. Its assets include Endemol Shine India, best known for its reality TV productions and OML India, which produces and runs some of India's biggest music and comedy festivals, and live events.

Emerald Media's managing director Rajesh Kamat has worked with big-name players such as Star TV News Corp and the Viacom 18 Group and is best known for his time as chief executive of Indian entertainment channel Colors.

As investors in YuppTV, their "ecosystem of other assets comes into play" in aiding content creation, he is convinced.

"Between Endemol and OML, these companies know the pulse of the customer, so that when they back YuppTV, they don't need to start from scratch," he says.

The paid subscription-based service charges according to the language package chosen. Prices could range from $6.99 a month (Gujarati) to $19.99 (Tamil) with full packages going up to $299.99 a year for Tamil. There is also a stable of on- demand films, many of which are recent releases. Current pay-per- view film titles on offer include Hindi courtroom drama Rustom, starring Akshay Kumar, and Telugu-Tamil psychological thriller Nayaki starring Trisha Krishnan.

Providing access to pay-per-view films is also an important piece of the puzzle as some of the territories that YuppTV covers do not get such releases in commercial cinemas.

With the investment, YuppTV is also looking to expand its global footprint by entering new markets with "significant South Asian communities" such as the Middle East with its potential viewership of 4.9 million households, and Malaysia with its 1.6 million households.

As for Singapore, he notes that demand here is "strongly dominated by the Tamil market".

He acknowledges that they "need to do a lot more marketing both offline and online" to increase their Singapore presence.

Join HWZ's Telegram channel here and catch all the latest tech news!
Our articles may contain affiliate links. If you buy through these links, we may earn a small commission.
Previous Story
Apple said to be testing more than 10 different prototypes for next-gen iPhone
Next Story
A new App Performance Class standard for SD cards could soon certify cards for app performance