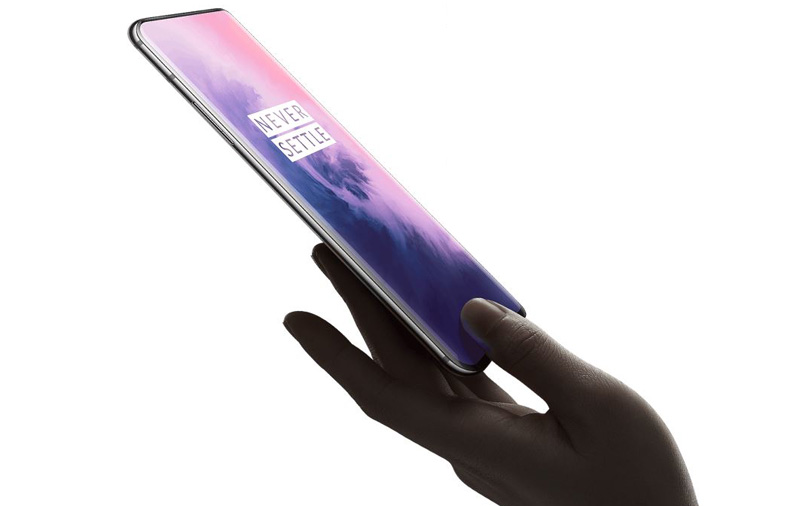 OnePlus has just announced the launch of its latest flagship smartphone – the OnePlus 7 Pro – and it’s quite a stunner. For starters, it has a fully tapered design on both front and back so you really won’t feel any edges when you run your hands across the phone. With dimensions of 162.6 x 75.9 x 8.8mm, it measures just under a centimeter thick and weighs just 206g.

While the overall size of the device is close to that of the 6T, the 7 Pro actually boasts a large 6.67-inch display thanks to a screen-to-body ratio of 93.22%. In terms of specs, the screen has an 800 nits brightness rating, pixel density of 516 PPI and a 100,000:1 contrast rating to go with a 90Hz refresh rate. Because it uses a pop-up front camera, the display truly covers the entire device, with no notches or gaps. 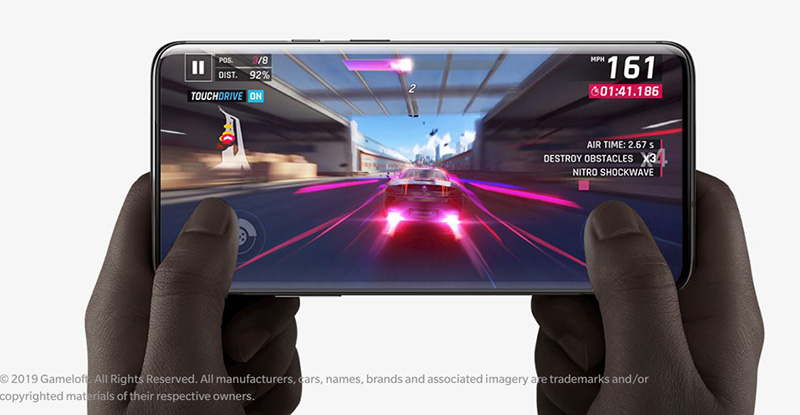 OnePlus says the screen has been awarded an A+ from DisplayMate, and that the Quad HD+ (3,120 x 1,440 pixels resolution) display supports HDR10 and HDR 10+, so you should get the full HDR experience when watching those Netflix, Amazon Prime or YouTube videos. Even the in-screen fingerprint sensor is said to be improved, with a larger sensing area and the ability to unlock the screen in just 0.21 seconds!

Gamers will be pleased to know that the OnePlus 7 Pro houses the Qualcomm Snapdragon 855 processor within. This is backed with up to 12GB of RAM (the other options are 6GB and 8GB) and the Adreno 640 GPU for faster graphics performance. The 7 Pro runs on OxygenOS (based on Android 9) and will come in storage options of 128GB and 256GB. UFS3.0 technology is said to be used for faster data transfer, and there’s also a 10-layer liquid cooling system in the phone to ensure everything runs optimally even after long periods of gaming. 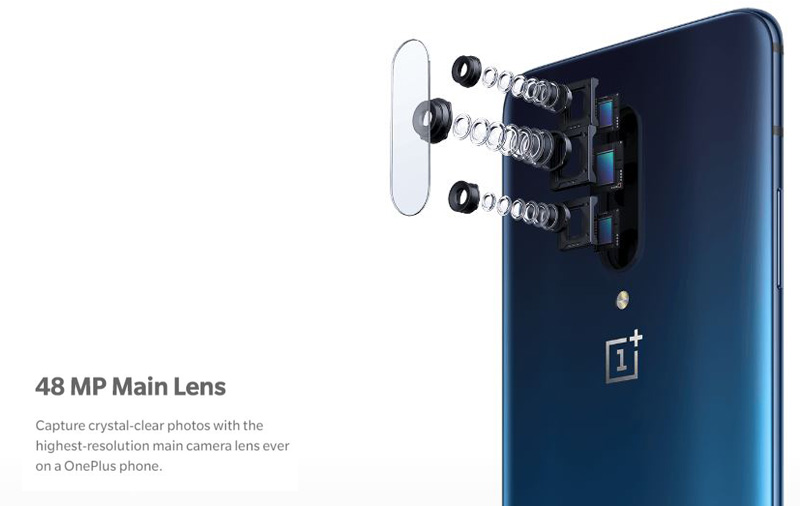 In terms of the camera system, the 7 Pro has a main 48MP camera with a maximum aperture of f/1.6 and both OIS and EIS built-in. This is backed by an 8MP f/2.4 telephoto lens and a 16MP f/2.2 ultra-wide angle 17mm lens that has a field of view of 117o. The camera will allow for 3x optical zoom and feature an updated Portrait mode that’s said to ensure facial details are beautifully rendered. 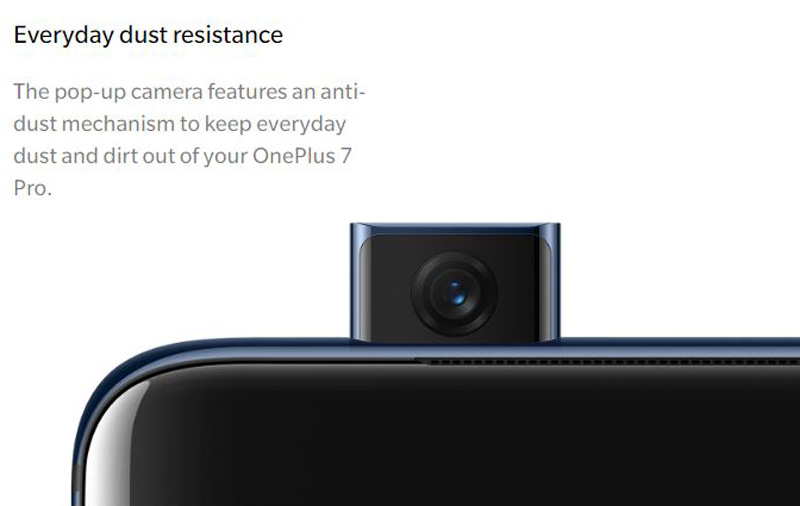 As mentioned above, the front camera is hidden within the body of the 7 Pro, popping up only when needed. OnePlus says this is designed to withstand sliding out up to 300,000 times, and that there’s an anti-dust mechanism to keep dust out. There’s also a smart drop protection feature which automatically retracts the camera if your phone is dropped, thus keeping it safe from harm.

In terms of audio, the 7 Pro drops the audio jack in favor of an USB type-C connection, so you’ll have to use Type-C earphones with it. It does come with Dual stereo speakers built-in though, and these are certified to support Dolby Atmos content for a more immersive experience. 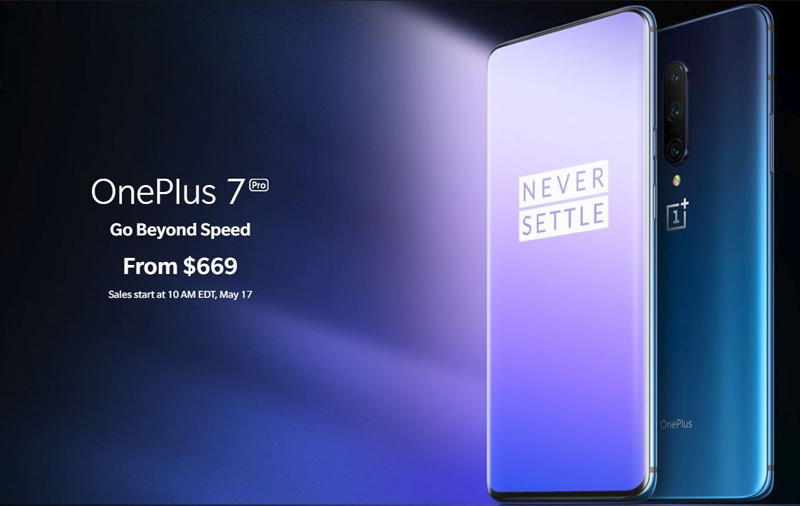 Fast charging has also been built-in. OnePlus calls this Warp Charge 30, and it’s said to have the 4,000mAh battery up to about half capacity from flat in just 20 minutes of charging. The 7 Pro does not offer wireless charging, nor does it come with an IP rating (that means no dust and water protection). It will be available in a choice of Mirror Gray, Nebula Blue or Almond colorways at prices starting from US$669 from the 17th May in the United States. International pricing and availability have yet to be announced. 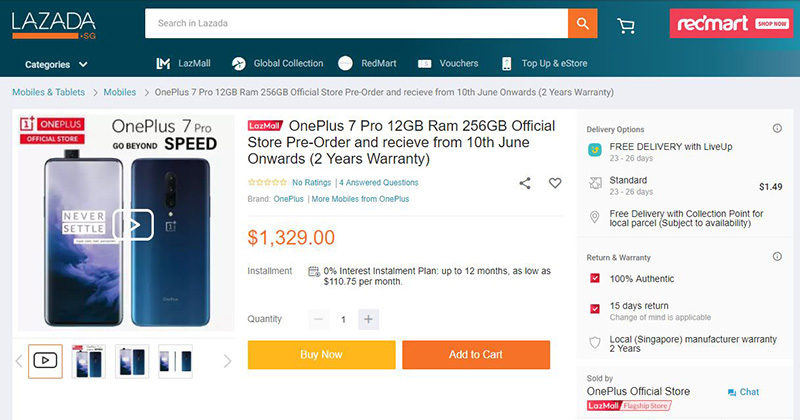 OnePlus 7 Pro with 12GB RAM and 256GB storage is now available for pre-order on its official Lazada store, with delivery slated from 10th June onwards for S$1,329. More details here.

The phone is on sale at a discount from Lazmall now.

Join HWZ's Telegram channel here and catch all the latest tech news!
Our articles may contain affiliate links. If you buy through these links, we may earn a small commission.
Previous Story
Get Apple's new Apple TV app by updating to iOS 12.3
Next Story
DJI’s Osmo Action is cheaper than the GoPro Hero7 Black and has two screens