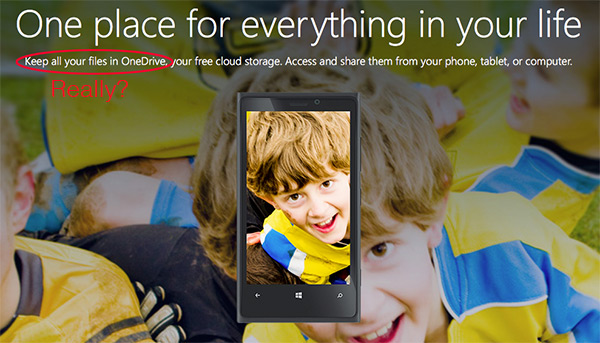 After going on a blistering run in recent months for making great software and hardware, Microsoft has just picked up a stone and dropped it on its own foot.

In case you missed it, I’m referring to the OneDrive changes that the “OneDrive Team” has announced in a blog post yesterday. In short, the company no longer plans to offer unlimited OneDrive storage to Office 365 Home, Personal, or University subscribers, a promise the company made a year ago. Starting now, only 1TB of OneDrive storage will be given.

Secondly, the 100GB and 200GB paid plans will be dropped in favor of a US$2/month 50GB plan in early 2016. Current customers of such plans aren’t affected.

And lastly, the free tier will see its storage drop from 15GB to 5GB. This is applicable for all users, so loyal, existing users aren’t spared either. The 15GB camera roll storage bonus will also be discontinued. All these changes will start rolling out in early 2016.

To smoothen the transition, if you’ve used in excess of 1TB, you will be notified of this change and will be able to keep your increased storage for at least 12 months. If you’re using more than 5GB, you will continue to have access to all files for at least 12 months after these changes go into effect in early 2016. Microsoft is also giving you a free 1-year Office 365 Personal subscription.

According to Microsoft, the decision to stop offering unlimited OneDrive storage came after it realized that a small number of users are using it to back up numerous PCs and store their entire movie and DVR collections. And in some cases, more than 75TB per user.

Seriously, I don’t buy this reasoning. If you use ‘unlimited storage’ as a selling point, you should have expected people to use it like it’s really…erm…unlimited. If you’ve planned for it, but went ahead thinking you can manage it, and then regret it now, then this calls into question the whole planning process, including the OneDrive team’s ability to design a product, and worse, the capability of Microsoft’s cloud infrastructure. Perhaps the writings are already on the wall: I’ve never gotten unlimited storage for my OneDrive account and OneDrive syncing never really worked smoothly enough for me (luckily, there’s Dropbox). And let’s not go into the removal of placeholder files in Windows 10.

Also, what’s the reason for dropping the free tier from 15GB to 5GB? Is Microsoft saying that it can’t cope with 15GB per user too? Or does it think that 15GB is too generous and is affecting Office 365 sales? Heck, isn’t 5GB lower than the 7GB Microsoft was offering before it went to 15GB? And finally, can I assume that OneDrive for Business users will also not be getting unlimited storage?

As Paul Thurrott puts it, “How can we ever trust these people again?”

Join HWZ's Telegram channel here and catch all the latest tech news!
Our articles may contain affiliate links. If you buy through these links, we may earn a small commission.
Previous Story
Plantronics brings added focus to the office with their latest headset: the Voyager Focus UC
Next Story
Google Inbox users can look forward to automated email replies on their mobile devices