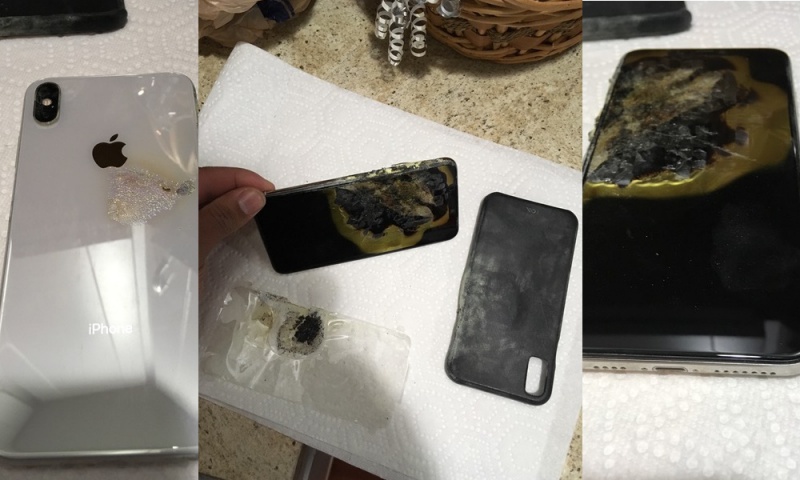 iDrop News reported that the incident happened on 12 December near Columbus, Ohio. The man, who wishes to be referred as Josh Hillard, claimed that he noticed a strange smell coming from his iPhone XS Max and felt a "large amount of heat" as well as burning on his skin. Seconds later, he saw green and yellow colored smoke coming out from his iPhone XS Max.

“Left no other option, I had to exit the room since there was a female in the break room with me and remove my pants. I ran to the boardroom where I got my shoes and pants off as fast as possible. A VP of our company put the fire out with a fire extinguisher because he heard me yelling.”

“Once the phone was extinguished, I was left with a hole in my pants, fire extinguisher on my pants/shoes, and some pain/irritation in my buttocks region where the pocket of my pants was located.”

“From the time of first noticing the fire and between removal of the pants and taking the phone out of my pocket and placing it outside, I inhaled A LOT of smoke. Later in the day, the team told me about the video that the office security camera captured.”

Hillard went to the Apple Store later that evening to seek an explanation. He was displeased with the customer service experience provided. He spent 20 minutes with an Apple staff answering questions about the incident and waited another 40 minutes with "zero engagement from the team" during his wait.

The Apple Store manager apparently told Hillard that his phone had to be sent to the engineering team for analysis and that this is the only way he could receive a replacement unit.

“I was given no other option and was told that nothing could be done for me in store if they could not keep the damaged phone. I asked about my clothing and they told me that they could make no promises until the phone was captured. I left one hour before the store closed and unsatisfied with the customer service in store, I took back the damaged phone and returned home.”

Hillard returned home and called the Apple Care hotline, and was transferred to a senior specialist in the safety department. He had to submit photos of the damaged phone and injuries on his body if there were any.

“I stated that I would send pictures of the damaged phone and clothes, but that even if there had been a visible injury I would not be comfortable sending pictures of such sensitive regions of my body.”

The next day, an Apple supervisor attended to his case and offered Hillard a new phone. He felt that a replacement unit is not acceptable and is seeking compensation for his damaged clothes, shoes and wireless service which was not in use during his time negotiating with Apple.

Hillard also mentioned that he was once a fan of Apple, but has since lost faith in the company and is currently considering legal action.

Previous Story
Samsung rumored to be working on a mini Galaxy Home smart speaker
Next Story
X’mas Gift Idea 10: Uncover the secrets of Bond, one brick at a time