The NZXT Hue+ is a smart, custom lighting solution that responds to your system

The NZXT Hue+ is a smart, custom lighting solution that responds to your system 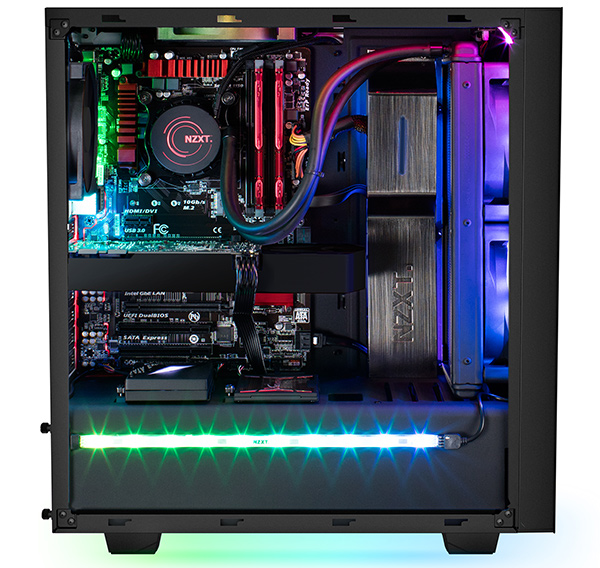 NZXT has just announced the Hue+, a highly customizable lighting solution for your PC. It is the successor to the NZXT Hue, which allowed users to tweak the lighting on the LED strip via three control dials.

The Hue+ is quite a significant upgrade over the original Hue. While the latter did allow you to achieve nearly any conceivable color by playing around with the RGB dials, that color would apply to the entire LED strip. In comparison, the new Hue+ can be controlled by NZXT’s updated CAM software (v2.1.8), which enables independent programming of each individual LED for nearly endless configurations.The CAM software also allows you to select from up to eight different preset modes and offers additional customization of things like LED lighting direction and speed.

Another nice upgrade is the new 2.5-inch form factor of the Hue+. You no longer need a 5.25-inch drive bay to install it like the Hue, and it will fit in any 2.5-inch drive mount. The Hue+ also supports far more LED strips than the first Hue. It has a dual-channel lighting output, and each channel can handle up to four LED strips for a total of eight strips from a single device. Furthermore, each channel operates independently of the other and can be assigned its own lighting mode or pattern.

The Hue+ ships with four LED strips and four extension cables, which should be more than enough for creating an outlandish lightshow, if you are so inclined.

One particularly interesting new feature is the smart lighting mode, which programs the LEDs to respond to CPU or GPU temperatures and even in-game frame rates. Then there’s an audio mode which allows it to react to your PC’s audio output – this means that your system lighting could pulse with every frag you make, and even dance in time to your favorite tunes.

If you find the included strips aren’t long enough, you can daisy-chain them together, or use the extension cables to access hard-to-reach areas. The method of attaching the LED strip has also changed from the Hue. Gone are the adhesive-backed clips – instead, the LED strips now come with strong magnets that allow them to easily snap onto any magnetic surface. For non-metallic surfaces, there is an optional 3M tape to fix the lighting strip in place.

You can already pre-order the Hue+ at US$59.99 on the NZXT Armory website.

Previous Story
The Harry Winston Opus 14 is a S$600,000 watch with over 1000 parts
Next Story
Xbox One to get its Windows 10 update on November 12
Featured Highlights