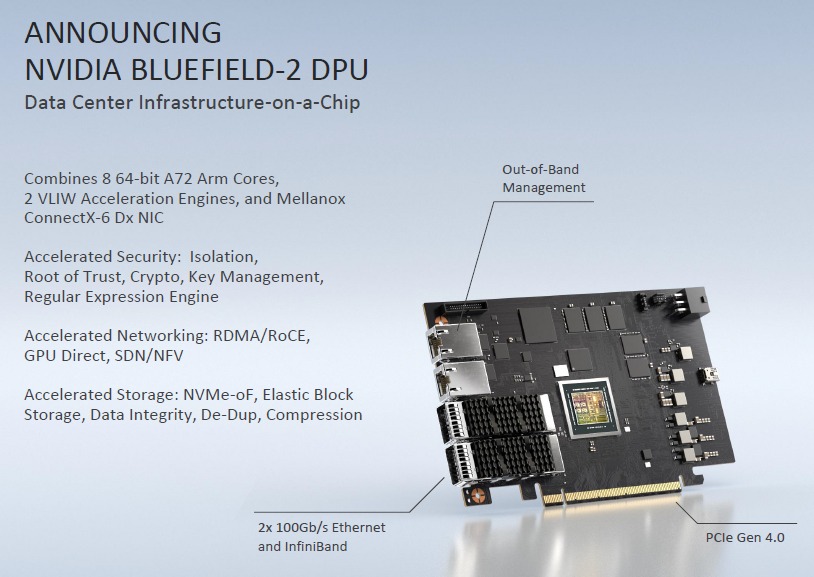 If the Ampere A100 GPU Tensor Core GPU was made to revolutionize AI processing workloads in the data center to solve industry-scale problems, NVIDIA's new BlueField data processing unit (DPU) is tailored for accelerating the data center infrastructure and its services.

As data centers are increasingly software-defined to enable them to be flexible in their capabilities, so does the load of running the infrastructure for such a data center.  NVIDIA cites that in such data center architectures, the CPUs can consume 20 to 30% of processing capability just to manage the networking, storage, security and this load could further increase with as more microservices are levied upon the system.

A new kind of processor is needed. We call it the data processing unit. The DPU consists of accelerators for networking, storage, security and programmable ARM CPUs to offload the hypervisor. - Jen-Hsun Huang, CEO of NVIDIA.

The BlueField-2 family of PCIe add-on DPUs are pitched as the next essential element for modern accelerated data centers where CPUs, GPUs and DPUs are combined to form a fully programmable, AI-driven singular processing unit. With an optimized node to offload critical infrastructure processing tasks such as networking, storage and security, the CPUs are freed up to tackle more valuable tasks for enterprise applications such as hosting more VMs and containers on a DPU-accelerated server. 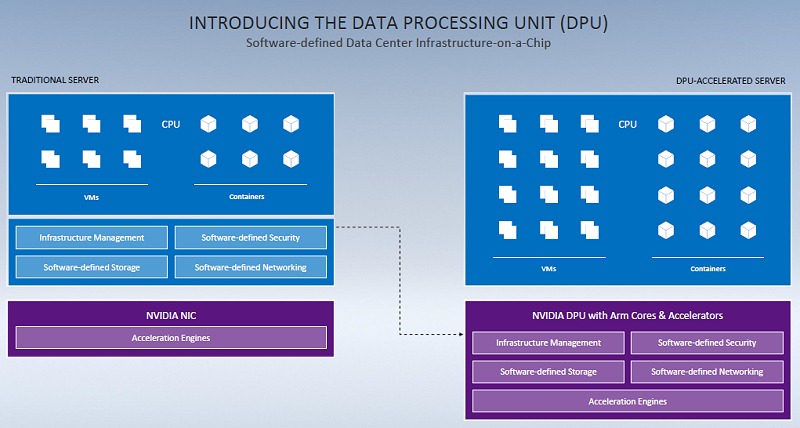 NVIDIA further claims that a single BluField-2 DPU can deliver data center services that potentially consume up to 125 traditional CPU cores and its achieves this by leveraging on its recent Mellanox acquisition that provides the vital high-speed inter-server interconnect utilizing both Ethernet and InfiniBand networking, as well as its ARM partnership that it intends to acquire. 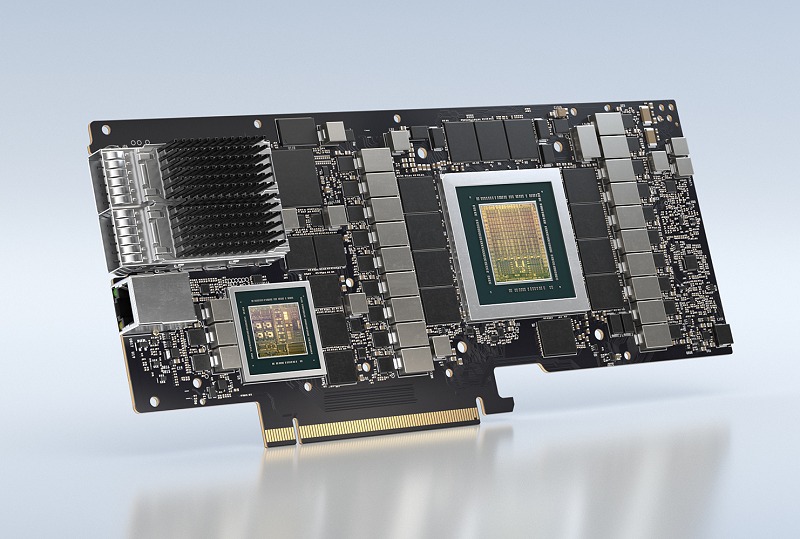 The other PCIe add-on card is the NVIDIA BlueField-2X DPU which adds on massive dose of AI and CUDA capabilities that can be applied to data center security, networking and storage tasks thanks to the third-gen Tensor Cores with the added NVIDIA Ampere GPU. Interfacing with the DPU over a PCIe Gen.4 interconnect between them, it is able to use AI for real-time security analytics including identifying abnormal traffic which could indicate theft of confidential data, encrypted traffic analytics, identify malicious activity, and dynamic security orchestration, including automated response.

BlueField-2 DPUs are sampling now and expected to be featured in new systems from leading server manufacturers in 2021. BlueField-2X DPUs are under development and are also expected to become available in 2021. Meanwhile, NVIDIA is already putting the finishing touches to the BlueField-3 design and BluField-4 is also in the pipeline and is scheduled to arrive in 2023. This roadmap reveal is to further boast confidence to partners, developers and clients that the DPU is here to stay for the modern data center needs. 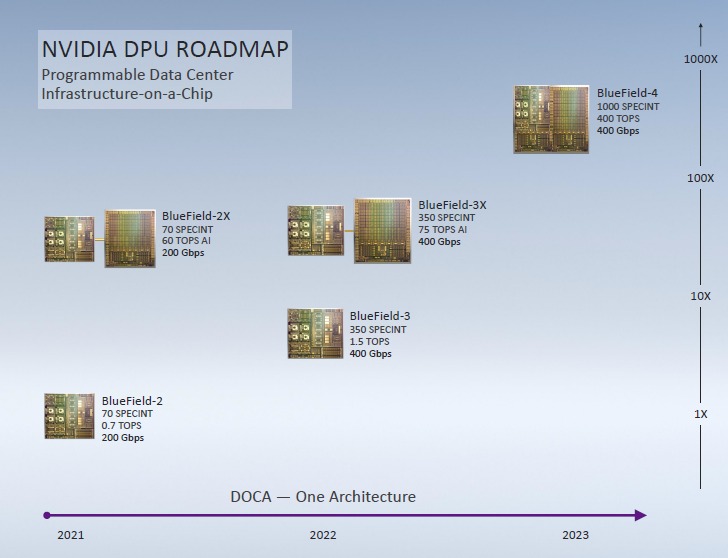 Join HWZ's Telegram channel here and catch all the latest tech news!
Our articles may contain affiliate links. If you buy through these links, we may earn a small commission.
Previous Story
NVIDIA Maxine platform reduces video call bandwidth consumption by a factor of 10
Next Story
StarHub and U Mobile successfully conduct cross-border 5G SA trial