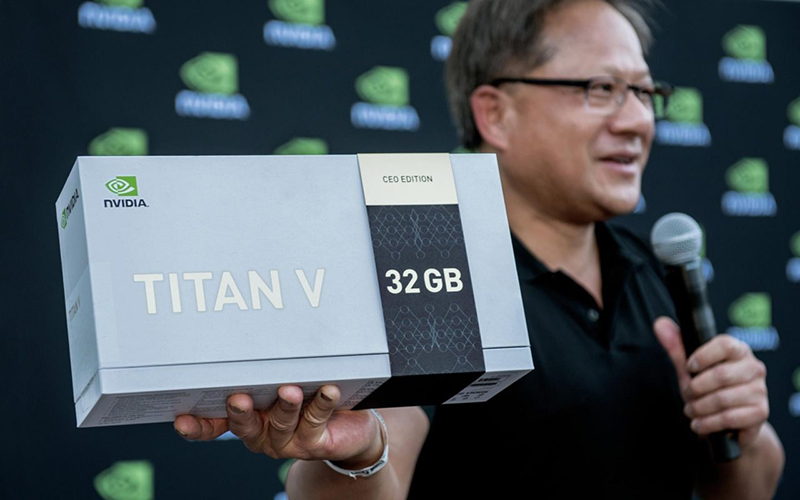 However, you likely won’t be able to get your hands on one. While the company gave away 20 units of the new Titan V SKU at the conference, this is not a retail product and isn’t expected to become one.

NVIDIA CEO Jensen Huang signed each of the GPUs he gave away, which is how the card got its name. That said, the CEO Edition GPUs differ from their unsigned counterparts in other ways as well, and they boast beefier specifications than the regular Titan V.

The CEO Edition card is equipped with a whopping 32GB of memory, compared to the original’s 12GB. In addition, it features 128 render output units (ROPs) to the Titan V’s 96, a wider 4,096-bit memory bus, and increased tensor performance of 125 TFLOPS (from 110 TFLOPS).

Furthermore, AnandTech also pointed out that the new memory configuration indicates the use of the new 8GB HBM2 memory stacks that NVIDIA recently implemented across its entire Tesla V100 family.

NVIDIA enabled all four of its ROP partitions as well, compared to just three on the Titan V, so the Titan V CEO Edition looks like it should be quite similar to the 32GB Tesla V100 in terms of performance on paper.

Having said all that, it seems unlikely that NVIDIA would produce just 20 units of a new card and stop there. This isn’t just a Titan V with more memory, and NVIDIA will still need to support the new SKU on the software front. As a result, it wouldn’t be entirely surprising if the card eventually hits retail channels, even if it may do so under a different name.

Previous Story
What's the difference between Apple's new 30W USB-C adapter and the old 29W one?
Next Story
The Xiaomi Redmi 6 Pro is the most affordable iPhone X clone to date